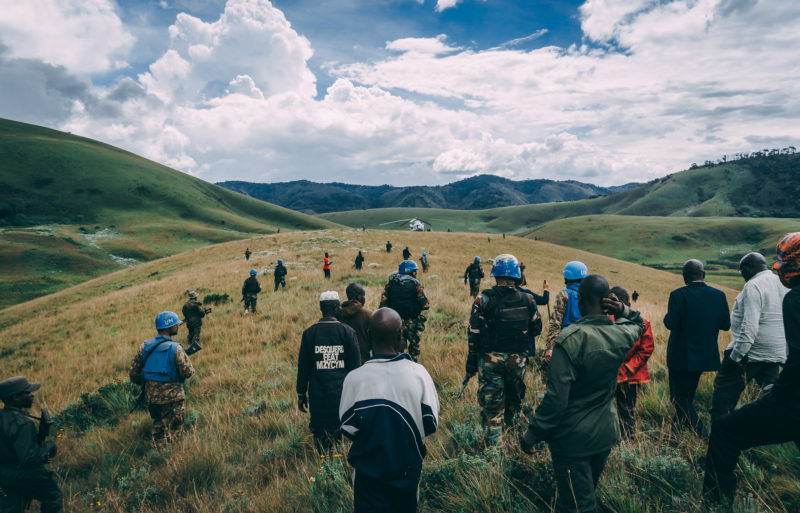 A MONUSCO delegation in Fizi, one of the territories affected by recent violences, March 16 2019 (MONUSCO/Jacob de Lange)

“Genocide.” That terrible word, which reverberates louder in the Great Lakes region than elsewhere was once again voiced, on October 16, like a stone cast into rough waters. This is how representatives of the Banyamulenge described the situation in the highlands of South Kivu in a press release. This community of Rwandaphone Tutsi cattle breeders claims it is being targeted by an extermination plan, led by the Mai-Mai Ebu-Ela, Aochi, Mulumba and Biloze-Bishambuke groups, allied with Burundi rebel groups. Is this really the situation? “There is no genocide,” countered a MONUSCO source. “However, there has been some ethnic cleansing of the Banyamulenge and other communities who live in the Minembwe region.”

Since the beginning of the year, Kivu Security Tracker (KST) has documented 26 violent incidents carried out by armed groups in the area. Twelve were carried out by Mai-Mai groups, two by the Burundi rebel National Forces of Liberation (FNL), and twelve by armed Banyamulenge groups (Ngumino and Twiganeho).

Nearly all of the Banyamulenge still present in the area have now gathered in Minembwe center, a village deserted by all other communities. There are said to be some 25,000 displaced civilians in this location alone, according to its deputy mayor (in French). “We’ve lost more than 100 people and over 35000 cows, the product of many generations’ labor,” stated a community leader.

What started this cycle of violence? It is difficult to pinpoint due to its long history. The Banyamulenge are a community of cattle breeders, from Burundi and Rwanda, and arrived with their herds of cows in the South Kivu highlands in the 19th Century. The Belgian colonial power however never created a “chieftaincy” for this semi-nomadic group, in contrast to the neighboring communities of Babembe, Bafuliru, and Bayindu farmers.

After independence, they were the target of ethnic hatred and discrimination. Yet some Banyamulenge took part in these abuses, often for purposes of self-defense. The rejection of this community increased considerably during the First and Second Congo Wars, when some of its members occupied important military and civilian positions in the violent and deeply unpopular South Kivu rebellions of the AFDL (1996-1997) and the RCD (1998-2003). After the end of the war, most Banyamulenge rebels joined the Congolese army. However, some small groups remained in the highlands, particularly the Federalist Republican Forces (FRF), claiming their community needed protection. To a certain extent, this was a self-fulfilling prophecy: their presence was later used to justify the mobilization of Mai-Mai groups.

For researcher Judith Verweijen of the University of Sheffield, the recent cycle of violence is the end product of a process that started “at least four years ago.” “It began with disputes over customary power in the Bijombo area and the increasing influence of the Banyamulenge Ngumino armed group (“let’s stay here” in Kinyamulenge). Possibly overestimating its strength, it started brutally taxing the local population. This accelerated the recruitment of self-defense groups in the area and led to a first wave of clashes in 2015 and 2016.”

This already tense context was made worse by growing regional tensions. After the highly controversial candidacy of Burundi President Pierre Nkurunziza for a third term in 2015, Burundi rebellions in the Congo saw an influx of new combatants, including the FNL and the Resistance for the Rule of Law in Burundi (RED-Tabara), in particular. The latter were supported by Rwanda from 2015, mostly in terms of recruitment and training, according to a UN group of experts.

However, this area soon became the base of another rebellion, this time hostile to Rwanda: the Rwanda National Congress (RNC) of dissident Kayumba Nyamwasa, exiled in South Africa. According to another UN group of experts report on DR Congo, he is based in the Bijabo forest, north of Minembwe, and has allied himself with Banyamulenge Ngumino combatants. The same report states that Burundi is also being used as a place of transit for some recruits.

Into this explosive cocktail, a spark was thrown: on February 21, 2019, Gady Mukiza, a Munyamulenge, became mayor of the newly created rural municipality (commune rurale) of Minembwe. The identity of the Minister of Decentralization and Institutional Reforms, overseeing such reforms, Azarias Ruberwa, also a Munyamulenge, contributed to increasing mistrust among neighboring community members. For these communities’ representatives, who often deny that Banyamulenge possess Congolese nationality and are opposed to their participation in local government, this was viewed as provocation. This was rapidly aggravated by a wave of violence committed by the Ngumino (see graph below).

Number of civilians killed in attacks by the Ngumino armed group

A coalition composed of local Mai-Mai militia, backed by the Burundi FNL and RED-Tabara rebellions, joined together to fight against them in March, according to Munyamulenge deputy Moïse Nyarugabo. According to two local sources (one from civil society and the other military), this coalition is reported to be supported by members of the Rwandan Special Forces, notably via their RED-Tabara allies. For Kigali, which has been in conflict with some Banyamulenge leaders for many years, taking part in this operation also had the benefit of depriving the RNC of a rear base.

Two events documented by KST will certainly contribute to heightening the emerging cycle of violence. On May 4, 2019, the Ngumino assassinated Banyindu customary chief Kawaza Nyakwana. This led to an upsurge in atrocities, in particular with the burning of villages, lasting until the month of June. Then, on September 7, Ngumino chief Semahurungure was assassinated in Tulambo village, several kilometers from the front line.

According to the above-mentioned local sources, as well as Congolese and Rwandan military sources, this operation was reportedly organized with Kigali’s backing, at least in terms of intelligence. A MONUSCO intelligence source questioned by KST was unable to confirm this operation but was surprised by the assassination which was “considerably different to usual Mai-Mai operational practices”, and which bore a “strange” similarity to the assassination, equally perplexing, of the head of the Democratic Forces for the Liberation of Rwanda, Sylvestre Mudacumura.

In any case, today the Ngumino appear weakened. The core Banyamulenge armed groups which are still active are the Twiganeho (“let’s defend ourselves” in Kinyamulenge), “self-defense” militia groups which traditionally mobilize when the community is threatened.

Since the latest violent episodes, MONUSCO has established two temporary bases in Minembwe. However, a Munyamulenge dignitary remains worried that “it’s already too late and that the current crisis will have irreversible consequences for the peaceful coexistence of communities in the area.”