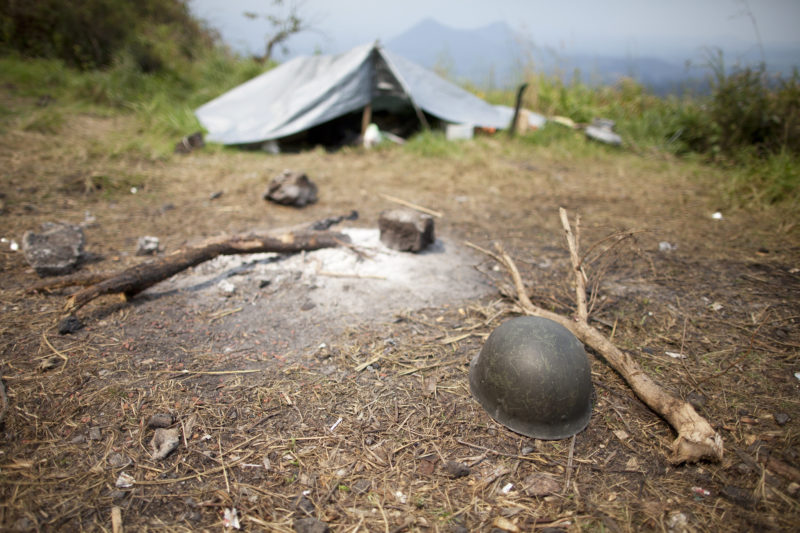 The scene took place in Baraka, in South Kivu, on January 17. A young militant from the Congolese Lamuka opposition coalition, wearing a white headband, whipped up the crowd in a hate-filled frenzy. While giving the Banyamulenge 48 hours to leave the country, he ordered that those unwilling to do so be forced out and issued threats against all those who assist or give refuge to members of this Rwandophone Congolese minority.

Was this a random event? This outburst was the result of a national protest called by the opposition (in French) against the “balkanization” of the country. In DR Congo, this term refers to the fear that there is a plot by neighboring countries, in league with certain communities living in Congo, to annex its rich land in the country’s east. According to this theory, these states are alleged to have clandestinely sent their citizens to DR Congo to prepare this annexation. Often, it is the Tutsi communities of the region, and specifically those from Rwanda, who are labeled as conspirators.

This topic, regularly raised in Congolese public debate, was strengthened in the nineties and noughties, by the occupation of large parts of the Congo by rebels partly led by members of the Rwandophone Congolese community, who were backed by Uganda (RCD/K-ML) and Rwanda (RCD-Goma).

In recent weeks, it has become increasingly popular, particularly since a press briefing by Cardinal Fridolin Ambongo (in French), the highest ranking Catholic authority in the country, during a visit to Beni. In his speech, he claimed that the massacres committed in that territory since November had been “planned” with the “aim of balkanizing our country.” “This [can be] verified by the replacement of displaced populations by populations that are generally Rwandophone and Ugandophone (sic)” he added, denouncing the “discharge” of populations by neighboring countries into Congo, namely Uganda, Rwanda, and Burundi.

Despite the prelate’s careful language, which also confirmed the Congolese nationality of some Rwandophone communities, including the Banyamulenge, the dissemination of this argument could heighten mistrust of these communities. Several hateful messages, similar to those of Baraka, have circulated on social networks throughout the month of January.

These suspicions have also been increased by the awkward comments of Vital Kamerhe, the president’s chief of staff, who was recently in Rwanda to attend the wedding of the son of the former Rwandan Minister of Defense, James Kabarebe. He was said to have offered 30 cows to “strengthen relations”  between Rwanda and Kivu (in French), as though the eastern provinces of DR Congo were a separate entity to the rest of the country.

Martin Fayulu, the opposition politician and candidate in the last presidential elections who has been using the rhetoric of balkanization for several years (in French), took advantage of this situation to repeat his argument, even publicly accusing President Félix Tshisekedi and his predecessor, Joseph Kabila, of carrying out this project (in French). In private, he even claims that Félix Tshisekedi is seeking to complete the project of “balkanization” together with Rwandan President Paul Kagame.

This argument, which offers a simple explanation to complex problems, has met with genuinely popular success. And the intense clashes, which have affected three areas in eastern Congo in recent months, have contributed to its increased popularity.

First, Mgr. Ambongo cited the clashes in Beni territory in support of his speech. There, 312 have been killed since November, mostly by the enigmatic Islamist uprising of Ugandan origin, the Allied Democratic Forces (ADF), according to the latest death toll by the Kivu Security Tracker (KST, in French). This modus operandi, which is particularly brutal and difficult to understand, has in fact led to the internal displacement of civilians fleeing the massacres.

The second area affected by intense clashes is the highlands of Fizi and Uvira. There, armed groups from local Banyindu, Babembe, and Bafuliru communities are disputing the creation of the rural commune of Minembwe, which is located in a Banyamulenge-majority area. Violent acts have been committed against civilians in addition to cattle theft. At the same time, Banyamulenge armed groups, claiming to defend their community, have also committed abuses against civilians. Many villages have been burned during this crisis, which has also led to population displacement. The defection from the Congolese army of Colonel Michel Rukunda, aka Makanika, himself a Munyamulenge, at the beginning of January, has fed into the idea that a vast Banyamulenge uprising is being created. This is “Banyamulenge expansionism,” a political leader from Bukavu told KST.

The third conflict feeding suspicions is that which was started at the end of November by the Congolese army to dislodge the Rwandan Hutu uprising of the National Congress of Resistance for Democracy (CNRD) in Kalehe territory. Similar to Rutshuru territory in recent months, many local sources contacted by KST have reported the presence of soldiers from the regular Rwandan army in Congolese uniforms. According to many of these sources, frightened inhabitants have, in turn, deserted the villages of Kigogo and Kasika.

However, these three situations in effect appear to obey different local realities, and it is difficult to see a coordinated plan on a regional level.

In Beni territory, the ADF arrived some 25 years ago with the aim of fighting against the influence of Kampala. They established relations with local communities and have taken advantage of their conflicts, according to research by the Congo Research Group (CRG). This group may, to a certain extent, have territorial ambitions, but it is difficult to imagine that they would one day obtain international recognition from an independent state or annexation to Uganda.

Yet, in his speech on January 3, Mgr. Ambongo stated that “Rwandan immigrants driven out of Tanzania some years ago” have been “dumped” in areas emptied of their inhabitants due to massacres. This is a reference to the migrations of Hutu populations who, in recent years, have left the Congolese territories of Masisi and Lubero to move to Ituri province, and who passed through Beni. The scale and current status of these migrations, however, remain difficult to evaluate. On the surface, they have had very little impact on the urban areas of Beni territory, where the bulk of recent massacres have taken place.

In the highlands of Fizi and Uvira, armed Banyamulenge groups appear weakened and divided, and are highly unlikely to have the means to act on any ambitions of political independence. The profile of the renegade colonel, Makanika, fits uneasily with the notion that armed Banyamulenge groups are associates of Rwanda. Makanika, on the contrary, took part in many uprisings against Kigali in the noughties, and was still described in 2013 as “strongly opposed to Rwanda” (in French). Several members of Banyamulenge civil society also express distrust towards Rwanda, in particular claiming that Mai-Mai uprisings and groups are supported by Kigali, which is reported to want to punish them for having given refuge to a Rwandan rebellion: the Rwanda National Congress (RNC).

Moreover, despite many rumors, few Congolese officers seem to have followed in the footsteps of Makanika, although it is the case that former soldiers from abroad have joined him, such as Gakunzi Masabo and Alexis Gasita, in his stronghold of Kajembwe. However, most Banyamulenge military leaders active in the Congolese army, such as Masunzu, Venant Bisogo, and Mustafa, are currently stationed very far from the front, in the west of the country. The former rebel chief, Richard Tawimbi, is also in the Congolese capital. And the other Banyamulenge officers are kept under close watch by their colleagues. Three Banyamulenge officers suspected of wanting to defect – Lieutenant-Colonel Joli Mufoko Rugwe, Major Sébastien Mugemani, and Sub-Lieutenant Aimable Rukuyana Nyamugume – are under arrest in the camp of Saïo in Bukavu, according to military and local civil society sources.

The last territory where the reality on the ground does not fit with the theory of balkanization is that of Kalehe. Several local customary authority, UN, diplomatic, and Congolese military sources have in fact confirmed to KST the presence of elements of the Rwanda Defense Force (RDF) during the offensive against the CNRD. Estimates of their numbers diverge considerably, from a handful of intelligence officers to several battalions. However, according to a Congolese military source, who claims to have witnessed the discreet arrival of a Rwandan battalion, these operations are one-offs and accepted by President Félix Tshisekedi. Their presence is alleged to only have been hidden due to fear of a hostile reaction by local inhabitants. Above all, rather than “dumping” Rwandophone populations in DR Congo, they have on the contrary led to a repatriation of some 2500 members of the rebel Rwandan CNRD (combatants and families) from DR Congo to Rwanda.

The theory of balkanization therefore inadequately describes the conflicts affecting the Kivus. Contrary to the situation between 2000-2013, no Rwandophone Congolese uprising appears in reality to be supported by Rwanda at this time.

This does not necessarily mean that the current situation is reassuring. Tens of thousands of eastern Congolese live in territories controlled by more than a hundred armed groups and which are, in fact, beyond Kinshasa’s control. Rather than a coordinated regional plan between neighboring states to carve up DR Congo, it is the tensions among these states, along with the weakness of the Congolese authorities, that appears to threaten stability in the Kivus.

Uganda and Burundi on the one hand, and Rwanda on the other, accuse one another of backing dissident groups in eastern Congo and waste no time in fighting them, either directly or by way of allied groups.

Kigali specifically accused Burundi and Uganda of supporting the RNC, which was partly confirmed by the UN Group of Experts on the DRC. The RNC has however been considerably weakened in mysterious circumstances in 2019: it has less than some fifty men near the village of Miti, according to sources from MONUSCO intelligence and civil society.

Several attacks originating on Congolese soil have also affected Burundi and Rwanda in recent months. This was the case of the attack on Kinigi in Rwanda on October 6 attributed by Kigali to the Rwandan Hutu uprising of the Rally for Unity and Democracy (RUD), which is reportedly supported by Uganda. Then there was the attack of October 22 in Musigati (Burundi), which was claimed by the RED-Tabara, a Burundian rebel group operating in South Kivu. Lastly, on November 16, Burundi suffered a new attack, in Mabayi, which the Burundian president blamed on Rwanda.

Additionally, several Burundian uprisings hostile to the Gitega government are present in South Kivu, such as the RED-Tabara, FRODEBU, or the FNL. According to a Congolese military source and a report by the UN Group of Experts, the RED-Tabara has in recent years been supported by Kigali. Also, the National Defense Force of Burundi and Imbonerakure militia (close to the Gitega government) regularly carry out incursions into DR Congo, according to reports by the UN Group of Experts on the DRC as well as security officials contacted by KST. Some members of the Burundian authorities are reported to support several Congolese armed groups, such as the Mai-Mai Mbulu, in the Ruzizi plain, probably to prevent possible attacks on their soil.

Were the Burundian presidential election, scheduled for May, to provoke violent protests comparable to the last one in 2015, South Kivu could rebecome a battlefield. This would not, however, mean that the “balkanization” of the country is underway.