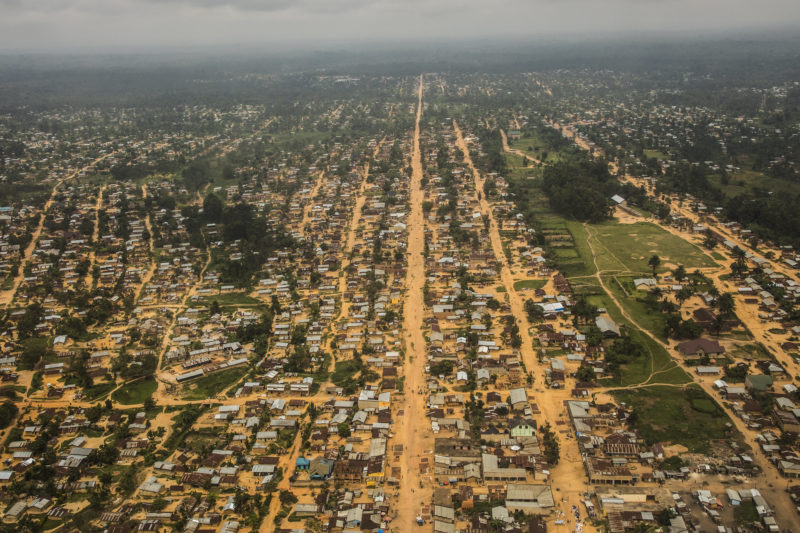 The town of Oïcha, located on the Beni-Eringeti trunk road, where several massacres have been committed since November (2019 World Bank/Vincent Tremeau)

It was January 10 of this year. After two and a half months of operations and massacres against civilians, the Congolese army (FARDC) announced that they had taken “Madina,” the headquarters of the Allied Democratic Forces (ADF), a Uganda-based Islamist group which has been killing Beni’s population for over six years. Better still, the FARDC announced that they had killed five of the ADF’s six heads. What followed was a period of relative calm and there was hope among the inhabitants of Beni territory that the killers had finally lost the war (in French).

However, since then, there has been a worrying upsurge in the number of massacres. 38 civilians were killed by stabbing in the villages of Manzingi and Mebundi on January 28, the deadliest day to date since the start of this recent wave of killings, which started in November 2019. In Beni territory, other significant massacres were committed on January 29, 30 and 31, and on February 11 and 17, with an additional 38 people killed in Ituri province, which had previously been spared such violence.

In total, more than 393 civilians have been killed since November in attacks attributed to the ADF in North Kivu and Ituri provinces, according to Kivu Security Tracker (KST) statistics. Such recent events contradict the optimism shown by the Congolese army, have caused turmoil within Beni’s population, and dealt a blow to Kinshasa’s credibility. In fact, President Félix Tshisekedi had announced his intention to “definitively exterminate” the ADF last October.

Yet this situation was sadly predictable. Doubts had already been raised on this blog, when we predicted that even if Madina were taken, this would not put an end to the conflict. One indicator in particular pointed to this: the relatively low number of ADF fighters and heads killed or arrested.

Since then, this number has barely risen. The Congolese army rarely communicates the results of its operations, and when it does, such as on January 11 (it had announced the death of 40 ADF combatants and 30 Congolese soldiers during its offensive against the “northern axis” towards Madina), its numbers are questioned by the vast majority of diplomatic and UN sources asked by KST. According to such sources, loss of life numbers are in fact reported to be lower for the ADF and much higher for the Congolese army. “The real numbers communicated to me are some 40 ADF killed, a dozen weapons recovered and nearly 300 deaths of our soldiers since the start of operations,” claimed a local Beni dignitary close to the Chiefs of Staff.

Whatever the case, ADF troop levels, estimated at between 790 and 1060 soldiers in 2019, probably remain high enough to continue to represent a long-term threat.

Moreover, KST was unable to verify the deaths of the five “generals” the FARDC claim to have killed. Contrary to custom when there is a death of a head of an armed group in eastern DRC, very few photos of the bodies of the ADF leaders have been shared on messaging platforms or social media networks. Photos of just one corpse, presented by the Congolese army as that of “Mwee wa Kazi,” appear to correspond to a known ADF head: Nasser Abdu Hamid Diiru, the deputy commander of one of their camps. However, this death has also not been confirmed by independent sources of the Congolese army. 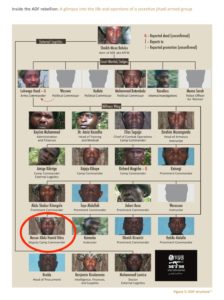 “The offensive was very badly prepared,” said Muhindo Nzangi, an opposition politician from North Kivu. “The FARDC launched a classic operation, to retake ADF bases. But the ADF had anticipated this: they did not fight, except on two occasions, at Lahé and Madina, and only then to slow down the FARDC’s progress and to give their members time to leave. On their side, the ADF carried out deadly ambushes on our soldiers.”

“The hilly, densely-forested terrain is ideal to move around without being seen,” added the French General, Jean Baillaud, who was deputy commander of the UN Stabilization Mission in the DRC (MONUSCO) from 2013 to 2016. “Against such adversaries, occupying static positions is not very useful. If they are weak, they are a target and can be attacked, in which case they become a supply of weapons and ammunition for the enemy. If they are strong, they can easily be bypassed.”

Should we therefore conclude that the operations to date – which have mobilized 22,000 men and 19 generals, according to a UN source – have proved ineffective? Not necessarily. Several signs suggest that the ADF has had to adapt its methods. First, since November 26, they have committed many fewer massacres in urban areas along the Beni-Eringeti trunk road and even less in more remote regional areas.

However, it is these urban attacks which have had the greatest impact. This was particularly visible on November 20, with the attack in Boikene neighborhood, in Beni town, which led to protests against MONUSCO. Google search statistics also show that the November massacres generated much more interest than those of January, even if these led to a similar death toll.

But interest in this matter declined substantially (number of searches for the words “Beni Congo” on Google since October 1 – source: Google trends)

Second, there has been food pillaging during several recent massacres. For the ADF, this is rarely their modus operandi. This suggests that their supply lines have been disturbed by FARDC operations.

Finally, recent killings have occurred to the west of National Route 4, in an area located far away from FARDC operations. This gives rise to several, not necessarily mutually exclusive, assumptions. Either the ADF has allied itself with other armed groups in the area, to whom they have “outsourced” the killings. Or some of them, at least, have managed to bypass the enemy to then move around in this area, less covered by security forces. Until the beginning of February, the FARDC had only one platoon in the town of Mangina and MONUSCO had none: its closest base is in Biakato, in Ituri province.

Regardless, the FARDC have inferred that the relocation of the killings to the west of Beni territory is a diversionary attempt by the ADF. “They want to force us to send troops there so that we leave the triangle of death to allow them to retake their bases,” an officer told KST. Nonetheless, according to another military source, a FARDC company was sent to reinforce Mangina at the start of February.

Despite President Félix Tshisekedi’s commitment, the current FARDC offensive could, like its predecessors, fail to defeat the ADF. In January 2014, the FARDC had already launched a major attack against the ADF, with the support of MONUSCO. After four months, they announced that they had retaken “Madina.” Then, in October, large-scale civilian massacres had occurred: 345 people had been killed within a period of three months.

The FARDC ended up leaving the forest, and the ADF was more or less been able to retake their former positions. “With hindsight, I realize that we had an overly binary approach to the conflict,” admits Jean Baillaud today. “We thought that the ADF were a clearly identified enemy whom we could defeat in a military operation. In reality, and today it’s clear, it’s not only an armed group, it’s also a network which controls large swathes of the local economy and enjoys a lot of support.”

To defeat this enemy, there might well be a need to implement a more holistic strategy, which leverages the Congolese intelligence services, justice system and diplomatic corps, and which targets not only the ADF themselves but also their financing, recruitment, and support networks both in the DRC and the region. Failing that, purely military offensives appear to be doomed to fail.