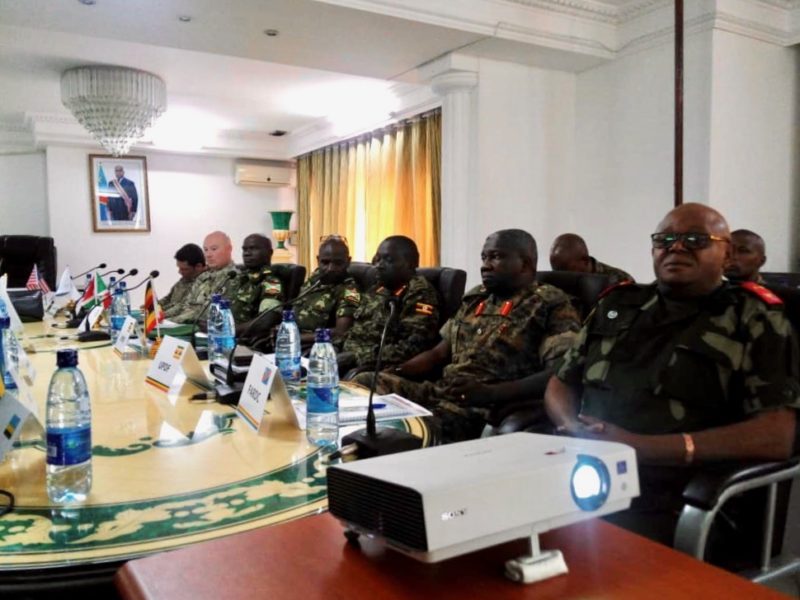 Representatives of the region’s armies at the first Goma meeting on September 13 and 14 (DR/Jonathan Kombi for actualite.cd)

This blog post was updated on Friday, November 15, 2019, to reflect the results of the meeting held between Félix Tshisekedi and Yoweri Museveni on November 9.

Uganda will not be taking part in a new venture in neighboring countries in the Eastern DR Congo. At least, not now and not in the form initially planned.

On October 24 and 25 in Goma, a highly anticipated meeting was supposed to have led to the creation of an “integrated Chief of Staff” of the region’s armies (Burundi, DRC, Rwanda, Uganda, Tanzania) which could have paved the way for these countries’ soldiers to take part in operations against armed groups in eastern DRC. The meeting in question did take place, in the presence of the Chief of Staff of the Congolese army Célestin Mbala, the Chief of the Ugandan army Peter Elwelu, the Chief of Rwandan military intelligence Vincent Nyakarundi, MONUSCO observers (led by the French Brigadier General Thierry Lion, the blue helmets’ deputy commander in DRC), and representatives of the US Africa Command (AFRICOM).

However, the Ugandan delegation refused to sign the final declaration. According to several military and diplomatic sources, including one present at the meeting, this refusal was only made known on the second and final day of the meeting. Uganda had not expressed any reservations until then, nor at the previous meeting held in Goma on September 13 and 14 (in French), nor on the first day, October 25. This radical shift suggests a counter order was issued from Kampala, which has had particularly tense relations with Rwanda for months.

According to a Congolese military source present at the meeting, and several sources close to the Ugandan army, Kampala now wishes to take part in the search for Allied Democratic Forces (ADF, a Ugandan rebel Islamist group, present in the Congo) within the framework of a bilateral agreement and is against any kind of regional agreement.

Uganda specifically wanted to avoid a deal that would have allowed the Rwandan army to be legally present on Congolese soil, including in the south of South Kivu and in the Grand Nord of North Kivu, according to a source familiar with the matter.

“Uganda appears to have realized that Rwanda would have the most to win from this coalition,” explained a diplomatic source. “Kigali would have gained a semblance of legality to justify the presence of its troops in eastern Congo and extended its sphere of influence.”

According to a source familiar with the matter, Uganda was also extremely annoyed by the discreet arrival of Rwandan troops in eastern Congo in recent months. Their arrival had been reported to Kivu Security Tracker (KST) by several sources from civil society, the army and local Congolese authorities, and was not disputed by Rwandan and Congolese military sources when asked.

However, Uganda was not alone in opposing the regional coalition. The Common Front for Congo (FCC), a coalition led by Joseph Kabila, with a majority in parliament, has expressed “reservations” about “foreign troops entering onto Congolese soil,” believing that it “would lead to a settling of scores between the troops, given their proven belligerence [and that] the collateral victims would inevitably be the populations in the east of the country” (in French).

In recent weeks, civil society in eastern Congo has also voiced opposition to any presence of foreign troops on its soil (in French). Parliamentarians such as UNC (Union for the Congolese Nation, a member of the ruling coalition) deputy Juvénal Munubo and senator Jean-Philippe Mabaya (opposition party) have also called on the executive to answer oral questions with debate on the issue, which seems to have embarrassed the government: no response has been provided on this matter, nor has any official announcement been made to national representatives on the ongoing negotiations. For Tshisekedi, whose slogan is “the people first,” supporting this project in the face of such popular hostility would have undoubtedly proven difficult.

Has the creation of this integrated Chief of Staff been definitively abandoned? Not altogether.

Congolese President Félix Tshisekedi and his Ugandan counterpart, Yoweri Museveni, discussed the matter of “security in the sub-region” during their meeting in Entebbe on Saturday, November 9.

According to the statement issued after the meeting, the two presidents have decided to work together, “including with other countries” to “combat the negative forces that [continue to] afflict the eastern part of DRC.”

According to Congolese and Rwandan military sources, the region’s armies have agreed to convene another meeting in a month’s time, with the date yet to be determined.

Uganda appears to have the power to make its conditions on collaboration be heard. President Félix Tshisekedi jeopardized his credibility by publicly committing, during a speech in Beni, to restoring peace before the end of the year (in French). Yet the “last offensive” against the group, launched with great fanfare on October 30 by the Congolese army alone (it failed to even receive the support of MONUSCO), seems to have already suffered from setbacks. During the night between November 5 and 6, at least ten civilians and six Congolese soldiers were killed in the village of Kokola, between Oicha and Eringeti, in an ADF attack verified by KST.

“The Congolese army suffers from structural weaknesses which mean that without additional resources success is unlikely,” claims a former MONUSCO official. “It lacks well trained special forces and intelligence forces. And the situation is even worse when it comes to aviation. It lost two of its three Mi24 attack helicopters in the mountains of Virunga in 2017 and therefore no longer has any capacity in this area. As for MONUSCO air support, it is not enough. That is why the intervention of Ugandan aviation and special forces, planned for in the framework of the coalition, makes sense.”

Félix Tshisekedi, who has to accommodate the reluctance of Congolese public opinion and that of his allies in the FCC, prevailing conditions in neighboring countries and the weaknesses of his army, has very limited room for maneuver to restore peace in the east of the country.