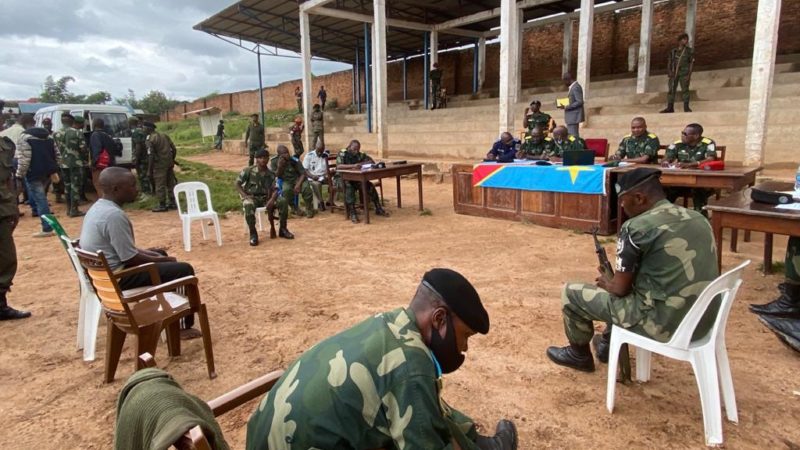 A hearing in progress before the military court in Uvira (South Kivu) on May 16, 2021. (Photo MONUSCO/Justice Support Section, Bukavu).

Despite what the Congolese authorities announced, there have been few military operations since the onset of the state of siege, and civilian security has deteriorated in North Kivu and Ituri provinces.

Regaining control of National Road 27, of the Mbau-Kamango trunk road, “freeing” of various localities in the territories of Djugu and Irumu from the clutches of armed groups, “neutralization” of the members of the Allied Democratic Forces (ADF) or their associates… Based on official statements, you might think that multiple victorious offensives had been launched by the army since the start of the siege on May 6, and that the security situation is about to come under control.

Data collected by the Kivu Security Tracker (KST) however, portray a different picture of the situation. Since the state of siege was decreed by President Félix Tshisekedi on April 30, civilian security as a whole has, in fact, gotten worse in North Kivu and Ituri provinces. KST has recorded the deaths of at least 223 people there in May, compared with 198 in April.

It is also difficult to detect a genuine uptick in FARDC activity in the same period. KST logged 29 clashes involving the FARDC in May, compared with 26 in April. No head of an armed group identified by KST has been killed or arrested by the FARDC or the Police – a Mai-Mai head, Jackson Muhukambuto, was arrested on June 8, 2021, but by the Congolese Institute for the Conservation of Nature (ICCN).

So what about the government’s recent announcements? At the start of June 2021, for example, Kinshasa announced the pacification of the Mbau-Kamango trunk road, in the territory of Beni. Yet the reopening of this trunk road had already been announced in September 2020 by the then minister of defense, and no incident had been recorded on this road by KST in 2021. It seems improbable for the state of siege to take credit for this…

However, there have been FARDC announcements that have resulted in concrete action in the field. The Congolese army, for instance, has retaken all of National Road 27, which links Bunia to Uganda. At least ten members of the Codeco-URDPC group, which was occupying various localities along this road, have been killed. Since then, this group has largely left this road and incidents have fallen drastically.

The FARDC also retook the town of Nyakunde, close to Marabo (Irumu territory) and several surrounding villages from the Chini ya Kilima-FPIC. Eleven militia members were killed and fourteen arrested. However, it remains difficult to know whether this offensive is genuinely linked to the state of siege: it started on May 2, that is, after the measure was announced, but before it came into force. This offensive took place at a heavy cost for civilians, as we will learn below.

Lastly, although some ten ADF members were effectively killed close to Halungupa (Beni territory) on May 9, the FARDC lost at least as many men on the days following. Above all, it has not brought the number of killings perpetrated by the ADF under control. Quite the contrary: KST recorded the deaths of 98 civilians in attacks attributed to this group in May, that is, nearly twice that of April (53).

Additionally, a series of killings were perpetrated close to Biakato, in Mambasa territory, an area in which the ADF have never been present until now. They therefore appear to be pursuing retaliation against civilians and growing their area of operations – a process ongoing since the start of the large-scale operations against them, launched in October 2019.

As concerns extra-operational measures, the FARDC announced that they had arrested three soldiers, suspected of links with the ADF, even if they refused from providing any details. Regional intelligence service coordination efforts were continued, with the organization of a workshop in Goma at the start of May, even if this was in all likelihood scheduled well before the state of siege announcement. This kind of measure may well have a positive impact in the long term. However, in the absence of more details on their substance, it is difficult to evaluate it. Their possible effects are in all cases not visible for the time being.

Nor has the attitude of the UN Mission to the DRC (MONUSCO), the target of protests in North Kivu in April, radically changed on the ground. It carried out an aerial bombardment of an ADF base on May 14, which had not occurred for several years. However, according to several UN sources, this operation had been planned before the state of siege decree.

MONUSCO remains committed to reforming its Force Intervention Brigade (FIB), by creating four “Quick Reaction Forces” of 150 blue helmets each, comprising Kenyan, Nepalese, South African, and Tanzanian troops, who would be capable of more rapid interventions. The Tanzanian faction is already operational but the new units will only be fully operational in August.

Above all, in the persistent absence of joint planning of operations – an absence which remains to this day unaltered by the state of siege – no truly joint MONUSCO-FARDC operation is possible, nor is any large-scale unilateral operation by the blue helmets planned. MONUSCO appears for the time being therefore, limited to reacting to attacks by armed groups in the best of cases. Regardless, KST has not recorded any FIB-initiated clashes with the ADF since 2018.

Lastly, problems relating to the absence of a working disarmament, demobilization and reintegration (DDR) program remained. Several former members of the NDC/R Bwira group, stationed in Rumangabo (Rutshuru territory), looted the neighboring village of Kayenzi to find food four days after the visit of the military governor of the province, Constant Ndima Kongba.

Concomitantly, there has been a marked uptick in the number of civilians killed in incidents involving the FARDC: 32 cases were recorded in May, compared with 17 in April. Several particularly serious incidents occurred in Ituri. After the FARDC retook the town of Nyakunde, they killed seven civilians during combing operations in the village of Nongo on May 2 and eight civilians in the villages of Banikasowa, Ndenge I and II on May 15. In their statement, the FARDC claimed that all of those killed on May 15 were militia members. However, the presence of women and children among the victims, witnessed by several sources, lends little credence to this statement. Beyond the abuses themselves, this type of violence can have a lasting adverse effect on the population’s confidence in the FARDC, a much-needed ingredient of success for any counter-insurgency operation. Many of the area’s inhabitants fled the area following the onset of operations.

As the problems relating to respect for human rights are longstanding, and as the operations against the Chini ya Kilima-FPIC started before the entry into force of the state of siege, it is difficult to certify that these new abuses are linked to this measure. However, it cannot be excluded that at least some of the incidents are related to a sentiment of heightened impunity on the part of some members of the FARDC following the state of siege announcement.

Beyond the military impact, the state of siege also has—perhaps above all— psychological, legal and political effects, which are likely to impact dynamics of violence in the long term.

These have enabled the FARDC to take control of local entities’ civil institutions (the provinces since May 6, but also of towns and territories since May 26). And the many statements by the new governor of North Kivu on the state of finances and revenue generation in his province may suggest that the control of the related financial resources is a matter of particular concern for the new authorities.

At the national level, the state of siege and the resulting security and military issues are hardly debated in parliament. At the national assembly, this measure–which still lacks a legal framework–was extended for two weeks at the request of the government. 334 MPs officially voted for the measure, with hardly any debate. President Félix Tshisekedi now plans to pass an authorization law to allow him to renew the measure without consulting parliament, according to reports of one of his discussions with senators, which would limit any regular assessment.

This situation could also be used by the government to adopt unpopular measures. This is specifically the case of military cooperation agreements that President Félix Tshisekedi has long wished for but whose implementation has always been thwarted by lack of political support.

Thus, the DRC and Uganda have signed an agreement to “stabilize” the east of the DRC according to the Ugandan government. However, this has not been made public, and nothing has been submitted to parliament, as the Constitution demands (in French) for this type of agreement. Discussions with Rwanda, which have been ongoing for several months, have continued. But “it has become practically impossible to publicly demand respect for the Constitution on such subjects,” explained a member of parliament anonymously. “The president’s followers would accuse us of being traitors to the nation.” In the absence of transparency on these agreements, it is difficult to assess their possible consequences. However, in the past, some foreign army operations on Congolese soil have led to human rights violations without long term solutions.

Unanimity on the state of siege has somewhat faltered since the Boga and Tchabi killings, during the night of May 30 to 31. Following this incident, the military governor of Ituri province was forced to recognize that until then he had essentially been focused on “assessing the situation” and the “implementation of all the teams.”

On June 1st, the Minister of Defense, Gilbert Kabanda, stated that the situation would be different within two weeks, after the government had “moved some men” and unblocked further resources. It has not, however, specified a budget or a timetable.