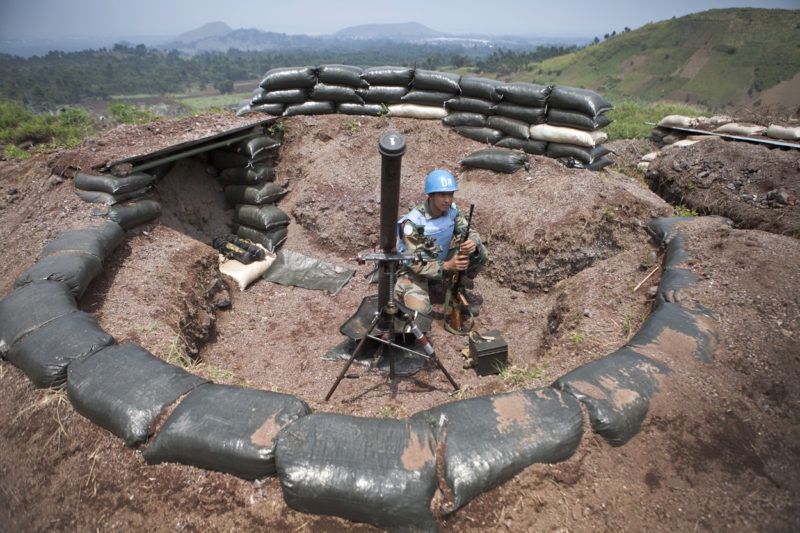 For the last 20 months, eastern Congo has been fighting the longest and most complex Ebola epidemic in DRC’s history. It has also been the most lethal, killing 2,276 people.

On top of this, a new communicable disease appeared in the Kivus in March: the coronavirus, or COVID-19. On March 29, the first two cases were confirmed in Bukavu. Since then, others were recorded in Goma and Beni.

This analysis is an attempt to anticipate the effects that this epidemic might have on peace and security in the Kivus, even if, due to its unprecedented nature, such an exercise is difficult. COVID-19 is the first coronavirus pandemic in history. It is currently still in its early stages around the world, and even more so on the African continent. Above all, it too has not hit a conflict zone before.

Although the Ebola epidemic can provide useful insights, the two situations are not the same. The Ebola epidemic only affected a limited area of the provinces of North Kivu and Ituri. While its death rate was very high (over half of those infected died), the disease was only transmittable after the dramatic and easily identifiable symptoms appeared and was therefore traceable. A vaccine was used to help control its contagion. The DRC also received support from the international community to cope with this epidemic totaling over 800 Million USD (in French). Health workers became targets (in French) and the capture of resources allocated by the international community became an objective, which seems to have escalated the conflicts.

Conversely, COVID-19 has shown no signs of stopping its geographical progression and nothing indicates that it will remain limited to certain areas in the east of DRC. Control strategies by means of tracking and confinement are extremely difficult with this virus, which can be transmitted by asymptomatic carriers. Only a handful of countries around the world (Singapore, Taiwan, South Korea, Japan or Vietnam) have until now been able to implement them with any success. All were countries with strong states, and it is unclear whether the DRC has such capacity, particularly in the east. This is also a pandemic which is affecting every continent. Although China and the European Union (EU) have committed to assist the continent (the EU announced that it has pledged 15 billion euros in aid), this assistance, targeted in part to the whole of Africa, will necessarily be more diluted than that of the response to the Ebola epidemic.

In such conditions, any prospective analysis is necessarily speculative, and any trends identified can only be provisional at best.

The arrival of the virus in the region has, nevertheless, had observable consequences in the Kivus. All the surrounding states have closed their borders to travelers: this was the case for Burundi since March 15, followed by Rwanda since the 21st and Uganda since the 23rd. These decisions have cut transport routes regularly used by Kivutians, such as the Bukavu-Goma road via Kibuye in Rwanda, or the Bukavu-Uvira road via Rwanda and Burundi. Some of the traffic has therefore been diverted to roads in poorer condition or that are more dangerous, exposing travelers to more risks. A rise in insecurity was seen at the start of April in the Ruzizi Plain (in French), without direct proof that this is due to the closing of borders. Also, provincial authorities have decided to close access roads to the main urban centers of the region, namely Bukavu, Goma, Butembo, and Beni.

Such restrictions do not apply in principle to the transport of goods. However, reports obtained by KST indicate that these decisions have been interpreted overly strictly and have in effect slowed down trade. Most of the region’s trade, and specifically that of small traders who physically move with their goods, have been affected. Additionally, these borders – particularly between Goma and Gisenyi in Rwanda – see thousands of workers cross them daily under normal circumstances.

The crisis has therefore led to a loss of such economic activity as well as to a rise in the price of basic necessities, which has eroded the purchasing power of inhabitants. On March 26, shortly after the closing of the borders, inflation had already reached between 5 and 88% for basic necessities according to KST data in Goma.

However, the economic situation could deteriorate further if local authorities adopt strict confinement measures, such as those put in place in the municipality of Gombe in Kinshasa since April 6 (in French). These could have devastating consequences on employment and income in urban areas where wage labor is the exception, remote working rarely feasible and where the informal sector represents most of the work available (the urban informal sector represented 81.5% of jobs in 2012 in the DRC). If implemented, such measures could lead to tension by negatively impacting the basic interests of most of the population.

Furthermore, the international economic slowdown is also affecting the Kivus. Similarly to previous economic crises, transfers of remittances by the diaspora, overrepresented in the most vulnerable classes of industrial societies, could dry up. The price of raw materials on international markets has also fallen considerably. The impact is already visible including on tin prices whose ore, cassiterite, is mined in Walikale and Shabunda territories.

However, the value of other ores produced in the Kivus such as gold, considered a refuge currency, remained at a historically high level.

The security implications of the global economic slowdown remain difficult to predict, however. The economic slump, particularly when it affects the young, could facilitate their recruitment by armed groups. The previous global financial crisis in 2008 and 2009, however, did not have a direct impact on the scale of the conflicts. 2009 was even a year of relative calm, with the signing of the 23 March Agreements which put an end to the most powerful of uprisings of the time, the National Congress for the Defense of the People (CNDP). These peace agreements, however, were the result of regional reconfigurations rather than the international financial crisis.

Above all, the effects of the coronavirus epidemic are not confined to the economy but impact all human activity in different ways. The UN Mission to the DRC (MONUSCO) is, for example, unusually affected by this crisis. While there has not been any known case among its ranks to date (according to a spokesperson asked by KST), it has taken preventative measures to avoid becoming a vector of this epidemic.

It has urged its staff who are at risk to return to their home country. Its civilian staff who have remained in the DRC have to work remotely from home. The rotations of uniformed personnel have been suspended for an initial period of three months, which in the medium term could have a negative effect on troop morale. MONUSCO’s network of regular air links (the densest in the country) has been suspended, which poses logistical problems for many organizations who depend on it, including the FARDC.

Despite such precautions, hostile reactions from local communities towards UN staff could increase, as the coronavirus is, for the moment, largely seen as a problem that came from abroad. This kind of phenomenon has been seen by KST many times during the Ebola epidemic (in French). Moreover, hostile reactions to foreigners have also been seen in Kinshasa since the start of the coronavirus epidemic (in French).

Over the course of the coming months, MONUSCO donor states, who provide troops and finance, could focus their resources on their own countries, relegating the crisis in the Kivus to the back of their minds. Mediation and demobilization initiatives for armed groups, which require travel, meetings and other gatherings, risk becoming more difficult due to the measures aimed at fighting the health crisis. Some bases where combatants were gathered have been closed (such as in Mubambiro near Sake), with probable negative consequences for security.

It follows that MONUSCO’s effectiveness will likely suffer for several months. Its ability to maintain pressure on armed groups, already found lacking by many Congolese, will be further weakened.

Countries in the region, which are often more closely integrated with the international economy, are also likely to be severely affected by the crisis. In recent years, Rwanda in particular has heavily invested in the air transport, tourism, and conference industries (in French). The exceptionally severe impact of the coronavirus crisis on these sectors could result in a shock leading to a review of the country’s priorities.

Also, if the crisis there were to lead to political instability in neighboring countries, including among the elite, turning their focus abroad – and particularly to the DRC – could be a survival strategy for those in authority. Furthermore, this shock comes at a time when levels of distrust between Uganda, Rwanda and Burundi are exceptionally high, despite the efforts of the DRC to bring them together.

The war by proxy being waged by these countries on Congolese soil, particularly in the highlands of the South-Kivu, could therefore continue or even escalate. Controlling smuggling routes, particularly for resources which have maintained their value such as gold, could become even more critical at regional level.

Further, Congolese security forces risk having to deal with mounting challenges. The imposition of social distancing measures could force them to deploy their very limited resources to urban areas. Additionally, in the Kivus, the maintenance of order frequently leads to abuses by the security services, which can degenerate into local conflicts. The Congolese state’s budget crisis, which is likely to worsen mainly due to the global economic slowdown, will make financing military operations harder. Even if MONUSCO were to seek to do everything possible to continue to support the FARDC in their fight against armed groups (in French) – particularly the Allied Democratic Forces (ADF) in Beni territory – the weakening of both the FARDC and MONUSCO may have an adverse impact on such operations.

Armed groups and militias are also likely to be affected by the current crisis. Although it may be difficult to quantify, a large part of their income comes from taxes collected at roadblocks, where activity has already dropped, and in all probability for a prolonged period.

This could incite such groups to use other means, including violent ones, to make up their shortfall in income: cases of kidnappings for ransom, looting and abductions may rise. Also, the issue of controlling smuggling routes could become even more critical.

The growth of self-defense groups (Mai-Mai or Raia Mutomboki) has also historically been linked to perceived threats from abroad, such as the presence of neighboring countries’ armies in the 1990s or of uprisings backed by foreigners in the 2000s and 2010s. Even though the coronavirus pandemic is a different type of threat, armed groups could exploit the need for more security by carrying out checks on movements within communities, for example, since the virus is currently widely seen as a threat which came from abroad.

Lastly, the desire to appropriate part of the international aid allocated to fight the disease – regardless of whether it is financially significant – could add to continuing insecurity, as was the case during the Ebola epidemic.

A paralyzed international community, an escalation of regional conflicts, a weakening of the state… If confirmed, these trends may foster the emergence of new militias and armed groups, accelerating the fragmentation of the security landscape in the Kivus. Within a decade, the number of armed groups has increased from 30 to 130. Their numbers could rise further still in the aftermath of the coronavirus crisis.