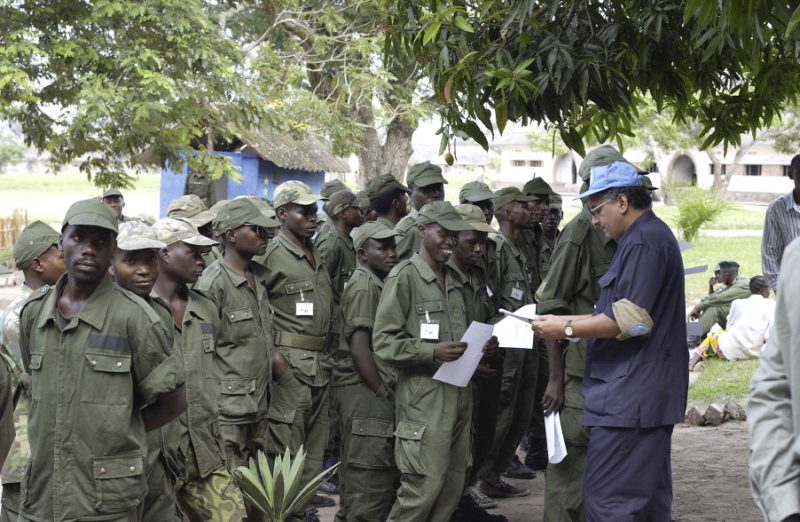 “Our fight will be to bring you peace. A definitive peace, a peace necessary for the stability of our country. And [for] that peace, believe me, I’m willing to die.” In Bukavu on Monday October 7, Congolese President Felix Tshisekedi made an ambitious commitment.

His election, it is true, provoked a wave of armed groups surrendering and the hope that peace would finally return to the Kivus. However, in Kalehe territory, some twenty kilometers away, local residents are unsure as to whether this is the best way forward. A few days before the president’s speech, the process almost seemed to be in reverse: Butachibera, the head of a Raia Mutomboki militia, who had recently surrendered to the Congolese army, decided in the end to return to the bush to take up arms again.

In this case, as in many others, the main reason for the failure of demobilization appears to be the lack of preparedness by Congolese authorities. “In reception centers, militia members who have gone there have no access to mattresses, beverages, not even food,” complained a Congolese army officer on duty in the area. We have to ask the local population for help. If we had the capacity to accommodate them, all armed groups would have already surrendered!”

The failed surrender of Butachibera is far from an isolated case. Last March, Ngubito, the head of the Raia Mutomboki Kabishula, surrendered with 400 men before returning to the forest. “Colonel” Mayani, of the Union des patriotes pour la libération du Congo (UPLC), had also laid down arms but most of his 500 men went into hiding at the end of September. In Fizi territory, in South Kivu in February, hundreds of combatants from the Mai-Mai Reunion group also took up arms again after having been stationed nearby. In March, it was the Congolese army that attacked the men of Mai-Mai “General” Ebu Ela, who were regrouping precisely in order to surrender. Since then they have gone into hiding and are taking part in the community-based conflict ravaging the Minembwe area. A similar scenario occurred in Kasai in February: in Kamako, the poorly organized surrender of a group of Kamuina Nsapu militia members ended in shooting, and the deaths of 19 of these militia members at the hands of the Congolese army, as indicated in a report by the Congo Research Group (CRG). The upshot of this: their brothers-in-arms have since taken up arms again.

The issue of adequately providing for ex-combatants is not new. In 2014, Human Rights Watch (HRW) revealed that 100 demobilized former combatants or members of their family had died of hunger and disease due to failings on the part of the Congolese government. In 2015, a budget of 85 million dollars was approved for the Implementation Unit of the National Disarmament, Demobilization and Reintegration Program (UEPNDDR). However, it never received any funds.

Failing any genuine change in this area, there are credible fears that the wave of surrenders initiated by the election of Felix Tshisekedi will come to nothing and that an historic opportunity will have been wasted.

The president however did ask in February that the head of MONUSCO, Leila Zerrougui, provide him with assistance on this dossier. But setting up the program took several months. According to a MONUSCO official, its implementation was reported to have suffered from disagreement within the UN mission. “Some of us wanted the government to start by putting its multiple structures in charge of this dossier in order: the UEPNDDR was not restarted by Tshisekedi’s team. There is also a unit is in charge of this in the army. And Tshisekedi has asked his advisor Claude Ibalanky to deal with these issues: he has appointed him as coordinator of the National Oversight Mechanism of the Addis Ababa Agreement. Others believed that we should launch an ad hoc program as soon as possible.”

“There have been delays, it’s true, but it’s not MONUSCO’s fault”, claims Florence Marchal, Head of Mission Leila Zerrougui’s spokesperson.

Whatever the case, this program is finally being rolled out. Following the meeting between Felix Tshisekedi and the provincial governors of Ituri, Maniema, North and South Kivu, and Tanganyika in Bukavu on October 9, the President confirmed that a “clear DDR plan should be submitted as soon as possible.” The UN Peacebuilding Fund released a first installment of 6 million dollars to finance it on Friday October 4. However, these funds are only for the demobilization of militia in the Kasais and Tanganyika. “In these provinces, the situation is simpler than in the the Kivus,” explained Florence Marchal. “Firstly, all the armed groups based there are national. Secondly, they generally don’t have any political demands. Our position on this issue is no impunity – those that surrender and have committed abuses should face justice – and reintegration back into civilian life, not in the armed forces.”

As things stand, previous waves of demobilization and reintegration in the Kivus have only met with limited success and are regularly accused of inciting the creation of rebel groups that profit from these programs. “We’re surely not going to give them money for arms, which by the way they only ever hand over in dribs and drabs,” railed another UN source some months ago, in the heat of internal discussions.

Nonetheless, as far as the armed groups in the Kivus are concerned, there are no plans to implement any programs. By default, the main option for them appears to be military defeat. At the UN General Assembly, Felix Tshisekedi advocated for MONUSCO, but for a mission that is “nimble, well equipped, strong, and with a properly adjusted mandate, similar to the Rapid Intervention Brigade, which once defeated the M23 Movement.” In Beni, on October 10, he announced a final attack against the islamist insurgency of the Allied Democratic Forces (ADF). And he had admitted to “information sharing” with neighboring countries that wished to stamp out hostile insurgencies in DRC.

The commander of the Democratic Forces for the Liberation of Rwanda (FDLR), Sylvestre Mudacumura, was killed on September 18, in an operation in which Rwandan special forces took part. However, the effectiveness of this type of targeted operation is questionable. The death of the head of an armed group can sometimes deprive negotiators of an interlocutor, and jeopardize the chances of troops surrendering. The death of Mudacumura, however, did not protect Rwanda from the deadliest cross-border attack originating from DRC in recent years on October 4. In any case, approximately 130 armed groups are operating solely within the Kivu region, which suggests a systemic problem. It remains highly unlikely that arms alone can provide a solution.

“For Ms. Zerrougui, there cannot be a purely military solution,”stated Florence Marchal. “The aim of these operations can only be to foster political dialogue and attack the root causes of conflicts.” In New York, where she was based at the end of September, the head of MONUSCO stepped up advocacy in front of the World Bank and donor countries that traditionally support DRC to finally pave the way for more ambitious demobilization programs.

“There is a clear expression of support for such efforts on their part,” stated Florence Marchal. “These 6 million dollars are important because they allow for a quick start and encourage other donors. But this sum is only a small fraction of the amount that we want to raise.” When such new programs are finally rolled out, will the Kivu rebel groups still be willing to put down their arms?