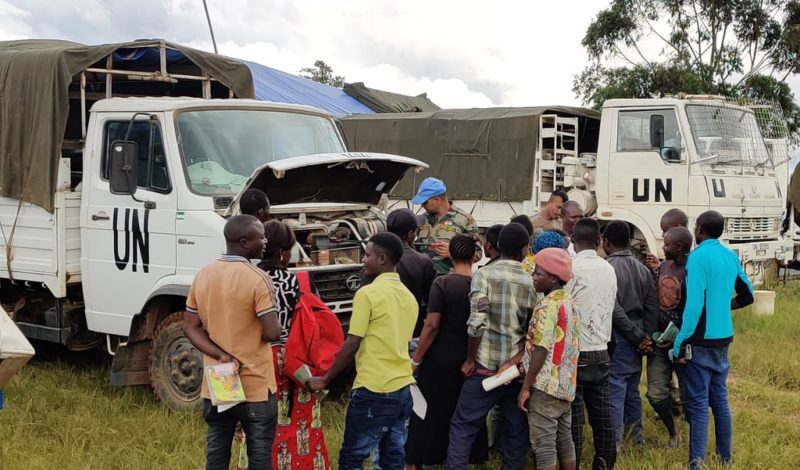 A “Short Course on Vehicle Repair” given by the Indian contingent of MONUSCO in Lubero territory. (MONUSCO/Force)

Twenty years. On November 30, it was exactly twenty years to the day that the UN peacekeeping mission in DRC was born. No one, however, had the heart to celebrate this anniversary.

Since November 22, MONUSCO has been facing a popular uprising on a scale rarely seen in North Kivu. On November 25, one of its camps, in Beni’s Boikene neighborhood, was even partly destroyed by protesters. The protesters have accused the mission of inaction – and its most vocal critics of complicity –  during the killing of civilians in recent weeks.

The Kivu Security Tracker (KST) has recorded the deaths of at least 161 civilians by armed groups since November 5 in Beni territory. In the vast majority of cases, these abuses were carried out by the Allied Democratic Forces (ADF, a Uganda-based Islamist rebellion), in all likelihood in retaliation for the “major offensive” launched on October 30 by the Congolese army.

During these violent demonstrations, Blue Helmets even opened fire, killing at least one civilian, who, according to the mission, “was about to throw a Molotov cocktail.” An investigation has been opened but this episode has played a part in further radicalizing the protests. They have even reached large towns: demonstrations have been organized by citizen movements such as Lucha in Goma and Kinshasa, calling for the UN mission to leave if it is unable to prevent the killings. In total, KST has logged the deaths of at least 15 people in recent demonstrations in Beni and Butembo.

The confidence of the Congolese in the ability of the mission to ensure their security has, in fact, waned in recent years. In answer to the question “Do you trust MONUSCO to ensure the security of your neighborhood/village?”, only 15% of Congolese polled in December 2018 by Peacebuildingdata.org replied in the affirmative (and only 14% for the inhabitants of North Kivu). This represents a fall of 11 points compared with 2015.

However, the current lack of confidence is occurring at a crucial moment when the future of the mission is under discussion at UN headquarters: its renewed mandate should be adopted before December 20. The mission’s budget, which was for a long time the largest in the world for a peacekeeping mission (it reached 1.45 billion dollars in 2013-2014), has dropped to 1.01 billion dollars, principally due to the reduction in UN funding by the United States. MONUSCO is now less well funded than MINUSMA in Mali or MINUSS in South Sudan.

In March, the Security Council had only renewed the mission in DRC for nine months, not the usual 12. French Minister of Foreign Affairs Jean-Yves le Drian had even announced that this shortened mandate would be used to plan for its “gradual disengagement.”  Meanwhile, a strategic review of the mission has been carried out by Tunisian diplomat Youssef Mahmoud. His report, whose conclusions were leaked to AFP (in French), argues for the mission’s withdrawal within three years.

Could it be that from New York to Beni, a convergence of interests of various kinds of frustration with the mission is leading to its untimely demise?

Some members of the mission are certainly demoralized by their scapegoating. MONUSCO is not responsible for the new wave of violence, as some have stated, particularly since the DRC Armed Forces (FARDC) denied it a role in planning their operations against the ADF.

On December 1, during his visit to eastern Congo, UN Peacekeeping Operations Chief Jean-Pierre Lacroix even stated that the attacks against the mission had been “premeditated, organized and financed” and called for “investigations into everything that has happened.”

Who orchestrated them? On condition of anonymity, some members of the mission revealed to KST that members of the Congolese army took part in fueling the protests against it, including by transporting protesters. KST has been able to verify that certain Congolese army officers have been spreading messages that are hostile to the Blue Helmets.

What was the aim of these officers in seeking to foment hostility against MONUSCO? Focusing criticism on MONUSCO could firstly hide their own responsibility. Also, most of those still in place at the head of the Congolese army were appointed by former President Joseph Kabila, who had called for the withdrawal of MONUSCO before 2020 (in French). Some Congolese officers are themselves under UN sanctions such as General Muhindo Akili Mundos, currently Commander of the 33rd military region (South Kivu and Maniema). According to a high-level UN source, Defense Minister Aimé Ngoy Mukena (who is close to former president Kabila), had still not signed the proposed new cooperation agreement between the FARDC and MONUSCO, even though the former agreement had expired in July.

This would not completely remove any responsibility on MONUSCO’s part. The attacks against civilians could have been anticipated. This armed group had already used this strategy during previous offensives, such as in 2014 (when 345 civilians had been killed in three months). Yet MONUSCO’s mandate defines protecting civilians as one of its two priorities (along with support for Congolese institutions).

Troops engaged on the ground in Beni territory are in reality ill equipped for this mission. In the main, these comprise some 300 Malawian, South African, and Tanzanian soldiers of MONUSCO’s Force Intervention Brigade (FIB), a combat force rather than a civilian protection force. This was created in 2013 to put an end to the M23 rebel movement, which was operating like a regular army. According to several diplomatic sources, it was borne of the will of southern African states to fight against Rwandan influence in the Kivus.

The FIB today must face a completely different enemy, using counter-insurgency techniques. According to the strategic review report, it is also facing “significant problems relating to unified command and control, intelligence, analysis, planning and coordination.”

Its troops have suffered heavy losses in Beni territory in recent years: 15 Blue Helmets were killed in the battle of Semuliki in December 2017. Then, during their last offensive against the ADF, in November 2018, eight Blue Helmets were also killed. Consequently, since then and despite instructions from the mission’s command, FIB patrols, under their own chain of command, with at its head, the South African General Patrick Dube, have become more cautious, including in towns of the Grand Nord of North Kivu.

Compounding this is the fact that the crisis has occurred during a transition at the head of the MONUSCO force: after the departure of its commander, the Brazilian Elias Martins, it found itself without a head. The new deputy commander, General Thierry Lion, who came to his post during the same period, therefore had to take on a dual role. This situation should, however, come to an end shortly: a new force commander, the Brazilian Ricardo Augusto Ferreira Costa Neves, was appointed on December 3.

How can the mission find a way out of this crisis? After the Beni protests, the office of the head of mission, Leila Zerrougui, called for a meeting with the highest Congolese authorities. A meeting of the National Security Council was held on November 25 in Kinshasa with the president of the republic, his ministers and several Congolese generals. It decided to resume “joint operations” between MONUSCO and the FARDC. However, beyond the public announcement, which might have calmed down the protesters, it remains difficult to identify the practical measures that this will involve.

Since then, the UN mission has released information on the support it already provides to the FARDC, mainly in the form of reconnaissance flights and the evacuation of wounded soldiers. It could increase its logistical support to Congolese forces but only to a certain extent: its budget already has a deficit of several million dollars according to the office of the Special Representative of the Secretary General.

Joint “planning” meetings between MONUSCO officers and the FARDC were also held (in French) in Beni territory. MONUSCO announced the arrest of combatants as part of joint “combat patrols” with the FARDC (in French). However, its participation in conflicts with the ADF, in the air or on the ground, remains off the table for the time being, according to several diplomatic sources. Several UN officials believe the FARDC operation to be ineffective and badly prepared. They also fear finding themselves mixed up in possible abuses.

In this context, one option could be to suspend operations against the ADF, to provide time to develop a new joint strategy between the FARDC and MONUSCO. Only President Félix Tshisekedi could take such a decision. But it remains to be seen whether Congolese military chiefs would agree. Above all, it would risk appearing as a step backwards in the eyes of the people, and particularly damaging to the president’s image. He had committed to eliminating the ADF before the end of the year.

On a deeper level, there is a profound disconnect between what the Congolese expect of MONUSCO and what MONUSCO is able and willing to do. President Tshisekedi, who wants to keep MONUSCO, is calling for the mission’s military capacity to be reinforced. Among civil society, also, Lucha is calling for MONUSCO “to do something or leave.” Political opponent Martin Fayulu and Nobel Peace Prize winner Denis Mukwege, both of whom are in favor of the UN presence, are calling for military intervention in Beni territory based on the model of the European Artémis operation in 2003 in Ituri province. The underlying idea behind such calls is that a hard-hitting military offensive could quickly eliminate the ADF.

Conversely, several MONUSCO officials asked by KST believe that the mission is “not there to go to war” and that the use of force is only effective if it goes hand in hand with political and diplomatic initiatives. In its report, “The Art of the Possible: MONUSCO’s New Mandate,” the Congo Research Group recommended rebuilding “a viable political strategy for protecting civilians in zones of armed conflict.” Also, the recent independent strategic review indicates that “there is no military solution to many of the security crises in the DRC.” The report also states that “without such a critical re-examination, the mission will continue to be burdened with unrealistic expectations and short term remedies that unwittingly allow Congolese stakeholders to shirk their own responsibility for addressing the causes of conflict many of which are the result of homegrown governance deficits.”

The report even proposes the withdrawal of the FIB, particularly to underscore that “it would also send the signal that neutralization is a sovereign duty of the national army.” In the eventuality that this force is renewed, it should be renewed for no more than one year.

These proposals are now under discussion at the UN Security Council. A withdrawal in less than three years appears unfeasible: even if such a decision were taken, carrying it out would require more time. Moreover, the DRC is still affected by an Ebola epidemic, which risks gaining ground due to recent attacks against MONUSCO and agents of the riposte, such as that at Mangina on November 27.

It is possible, however, that the Security Council will call for this withdrawal to be planned. According to a diplomatic source, the United States, in particular, has expressed its desire for the creation and adoption of a withdrawal timeline.