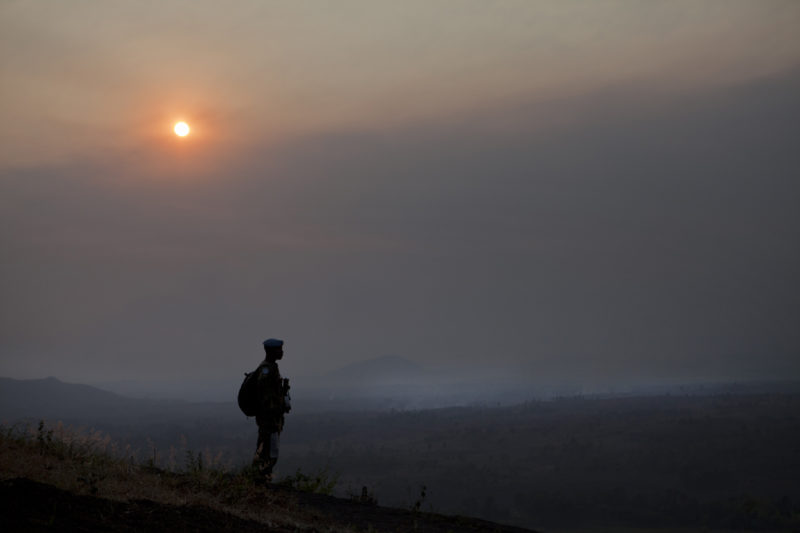 In Kanyaruchinya, near Goma, July 15, 2013. (Monusco Photo by Sylvain Liechti)

The division between President Felix Tshisekedi’s camp and that of his predecessor, Joseph Kabila, prevents, for the time being, the adoption of a coherent strategy to stabilize eastern DRC.

2127 civilians killed, 1450 abducted, 938 kidnapped… The Kivu Security Tracker (KST) recorded record-high deaths, abductions, and kidnappings for ransom during the first twenty months of Félix Tshisekedi’s presidency. This toll is even heavier than that of the last 20 months of his predecessor, Joseph Kabila (1553 civilians killed).

The difference is due mainly to the resurgence of killings perpetrated by the Allied Democratic Forces (ADF)– the very one that President Félix Tshisekedi had promised to “definitively exterminate” during a “final offensive” in October 2019.

In order to fulfill this promise, and, more broadly, to eliminate all foreign armed groups present in the Kivus, the Congolese president first attempted to set up a regional military coalition. He organized several meetings in Goma with neighboring countries’ armies’ chiefs of staff in September and October 2019.

Already at that time, Joseph Kabila’s political coalition, the Front Commun pour le Congo (FCC), opposed this project. And the deep divisions between Rwanda on the one hand, and Uganda and Burundi on the other, as well as the opposition of a large part of Congolese public opinion, finally killed the project.

But on October 31, 2019, the FARDC, most of whose generals were appointed during Kabila’s time, launched a unilateral offensive. MONUSCO, which had not been involved in the planning, did not participate.

One year later, results on the ground are sorely lacking. Despite the announced reconquest of certain ADF strongholds, the operation has largely failed to put this Islamist group out of action. In fact, the ADF has committed far greater massacres since the beginning of the offensive (more than 640 civilians killed in attacks attributed to the ADF in the past year, compared to 195 the year before). On the ground, the FARDC offensive is now largely at a standstill. The Congolese military seems to have become the target in this conflict: of the eight clashes between the FARDC and ADF recorded by the KST in August, for example, the ADF were the initiators in seven cases. “When the president wanted to launch this offensive, the generals accepted it because it allowed them to get the funding that went with it,” a senior FCC official commented to the KST “but they never really believed in it.”

This offensive against the ADF illustrates, among other things, the lack of a coherent, coordinated strategy among the various Congolese and international political leaders to stabilize eastern DRC. Félix Tshisekedi’s rise to power has not, for the moment, made it possible to remedy this.

In Kinshasa, a multitude of Congolese institutions play a role in the politics of the country’s east. However, these institutions are divided between the coalition of the president and that of his predecessor. The Minister of Defense, Aimé Ngoy Mukena, is close to Joseph Kabila. But the Deputy Minister of Defense, Sylvain Mutombo Kabinga, is a fierce supporter of Tshisekedi, as is the Minister of the Interior, Gilbert Kankonde. The National Monitoring Mechanism of the Addis Ababa Agreement (MNS), which is expected to publish a roadmap for stabilizing the country, is headed by Claude Ibalanky. Ibalanky, a close associate of Tshisekedi, comes from the diaspora and does not have extensive experience dealing with conflict dynamics in eastern DRC. “We do not know who is in control” a European diplomatic source revealed in an interview with the KST. In his speech to the nation on October 23, President Tshisekedi cited “issues relating to peace and national security” as the main reason why there are “differences that persist between parties” to the ruling coalition.

Indeed, not all personalities playing a role in the east are pulling in the same direction. This has been evident of late in the “hauts plateaux” (highlands) of South Kivu, where a conflict pitted several militias from the Fuliru, Bembe, Nyindu, and Vira communities against those from the Banyamulenge community. This conflict, which has gone through repeated cycles of violence for several decades, has resumed with renewed vigor since Tshisekedi’s presidency: the main belligerents (Mai-Mai René, Ebu Ela, Biloze Bishambuke, Twirwaneho, Gumino and Makanika) have killed at least 81 civilians in the past year, a sharp increase over the previous year (35 killed), according to KST figures.

In August, Tommy Thambwe Rudima, a former member of the Rassemblement Congolais pour la Démocratie (RCD) rebellion, traveled to the highlands to try to defuse the conflict. He is affiliated with the NGO Interpeace, and apparently also held a presidential mandate, which a source in the head of state’s office confirmed to the KST. However, at the MNS, a source interviewed by the KST said that he was unaware of this mission, and even went so far as to suggest that Thambwe Rudima was probably an imposter.

Then, in mid-September, Tshisekedist Deputy Minister of Defense Sylvain Mutombo traveled to Murhesa, near Bukavu, to participate in talks between armed groups organized by the NGOs Search for Common Ground (SFCG) and the Initiative for a Cohesive Leadership (ILC). This initiative was funded by the governments of the Netherlands, Sweden, and Switzerland, but was criticized by other donors and many sources in MONUSCO as being premature. Among the participants were representatives of the main belligerents in the highlands who eventually signed a very fragile ceasefire on September 16.

During the following days, relative calm prevailed in the region. But on September 28, Defense Minister Aimé Ngoy Mukena and Decentralization Minister Azarias Ruberwa, both FCC members, traveled to Minembwe to participate in the official induction of Gad Mukiza, a Munyamulenge, as mayor of the rural commune. This ceremony, held at a time when other local entities in South Kivu were still waiting for their administrative status to be formalized, was perceived as a provocation by a large part of the Congolese public. As a result, Félix Tshisekedi himself visited Goma on  October 8, promising to “cancel what has been done” in Minembwe. Since October 19, violent clashes have resumed in the highlands.

The rivalry between Tshisekedi coalition’s Cap pour le changement (CACH) and the FCC is also evident – and deleterious – in the development of a new Disarmament, Demobilization and Reintegration (DDR) program. While many of the armed groups in eastern DRC justified their struggle as being against Joseph Kabila’s presidency, Felix Tshisekedi’s term in office has sparked a real wave of voluntary demobilizations since the beginning of the year. Most of these combatants found themselves in cantonment camps. However, due to a lack of resources allocated to these camps, particularly food, most of them fled and returned to the bush.

With bitter memories of previous DDR programs, which they considered to be ineffective and non-transparent, donors did not release the funding that was hoped for for “DDR 3.” “The state was not fulfilling its part of the contract, which was to feed the cantoned combatants,” explained a source close to the dossier.

Félix Tshisekedi has therefore promoted a new approach: so-called “community-based” DDR. This was initially launched by governors of South and North Kivu, as well as Ituri, and is coordinated by Clovis Munihire, under the acronym “CIAP-DDRRRC”: Commission interprovinciale d’appui au processus de désarmement, démobilisation, réinsertion, reintegration et réconciliations communautaires. Its promoters want to change DDR methods, for example by avoiding the problematic DDR stage of confinement in military camps. The idea would now be for them to remain in their communities of origin. This approach also rules out any collective reintegration of combatants into the FARDC.

After having raised a certain amount of skepticism among the DRC’s main donors and MONUSCO, the project now seems to have the consent of the majority from this group. Most western ambassadors supported the new approach after a meeting with the president on October 22, where no FCC minister was present.

In fact, the president’s camp is hampered by the presence of people close to Kabila in key positions. Until now, DDR programs have been coordinated by the Stabilization and Reconstruction Plan for Eastern DRC (STAREC), the Congolese agency that is supposed to implement these programs with the international community. It is also this structure that controls the donor-funded Stabilization Coherence Fund (SCF).

STAREC is coordinated by Alain Kasindi, a man reputed to be close to Néhémie Mwilanya, the National Coordinator of the FCC, and is placed under the authority of the Deputy Prime Minister and Minister of Planning, Elysée Munembwe, who is also from the FCC.

According to a source related to the case, the Tshisekedi camp sees STAREC as a tool to capture funds for the benefit of the FCC. According to a UN source, the president intends to create a new structure, attached to the presidency, which would allow him, among other things, to control STAREC. Thus, in Goma the president announced the forthcoming appointment of a National Coordinator for community DDR.

The issue of funding for these projects, however, remains unresolved. During his visit to Goma, the president announced that $50 million would be allocated to DDR. According to a source at the World Bank, however, this money was not intended to finance DDR-C, but the “Social Fund for the DRC” to support communities affected by violence. Faced with a fait accompli, however, the Bank finally announced “a dedicated stabilization project to support the governors’ initiative in the east,” the parameters of which have yet to be defined.

In addition, the DRC is eligible for new funding under the World Bank’s Prevention and Resilience (PRA) allocation. This funding, provided by European diplomatic sources, totals $700 million. However, the Congolese government must meet several conditions in order to release these funds, including the publication of a comprehensive strategy for stabilizing the country. To date, the World Bank believes that the Congolese government has not met this condition.