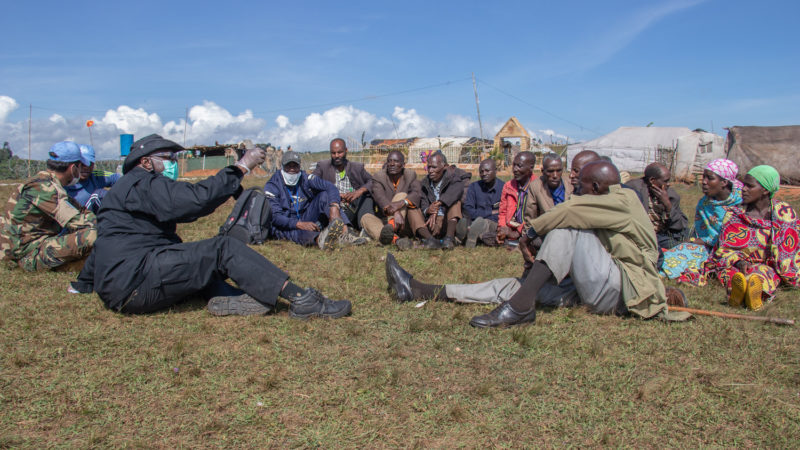 Mikenge, in the highlands of South Kivu on June 1, 2020. Photo Monusco / Alain Likota.

An agreement was signed on March 31, 2021 in Kinshasa, between the representatives of the different communities of the high and middle plateaus of South Kivu. While modest in scope, the dialogue organizers recognize that the agreement alone will not be enough to restore peace. But is this right direction?

This blog post is a translation of the original French version published on April 8, 2021. A new government of the DRC was announced on April 12, 2021.

March 31 marked the end of the “intercommunity dialogue on peace, security and development in the high and middle plateaus of Fizi, Mwenga et Uvira.” Over the course of three days, representatives of the Babuyu, Banyindu, Barundi, Bavira, Babembe, Bafuliru, and Banyamulenge communities met in the Béatrice Hotel in the Congolese capital. This conference brought to an end a process led by the international NGO, Interpeace, with the support of the UK Foreign, Commonwealth and Development Office (FCDO), to de-escalate the situation in the highlands of South Kivu.

This area, which has been volatile for some decades, has seen an upsurge in violence since 2016, and above all since 2018. It is the main home of the Banyamulenge community, whose members traditionally are cattle-herders (the transhumance of cattle is often a source of conflict) and speak a language close to those spoken in Rwanda and Burundi. This historically marginalized and discriminated against (in French) community saw some of its members join the ranks of Paul Kagame’s Rwandan Patriotic Front (RPF), then armed groups backed by Rwanda, such as the Alliance of Democratic Forces for the Liberation of the Congo-Zaire (AFDL) and the Congolese Rally for Democracy (RCD) in the 1990s and 2000s, which committed abuses against civilians in South Kivu, sometimes in the context of local conflicts.

This fed into a deepening of the mistrust and discrimination against them and encouraged the formation of armed groups by other communities, particularly of the Mai-Mai type. From 2018, the situation considerably deteriorated following abuses committed by the Banyamulenge armed group, “Ngumino” (“let’s stay here”), against civilians, including the traditional chiefs of other communities (such as the assassinated Chief Munyindu Kawaza Nyakwana), the presence of Rwanda National Congress (RNC) rebels of Kayumba Nyamwasa in the area, and the decree confirming the creation of the rural commune of Minembwe led by a Munyamulenge mayor, thereby escaping the authority of the South Basimunyaka groupement.

A significant coalition of armed groups, comprising in particular the Mai-Mai Yakutumba, Ebu-Ela Mtetezi or Biloze Bishambuke (from “indigenous” communities) and Burundian rebels of the Résistance pour un Etat de droit (RED-Tabara), who Burundian authorities accuse of being backed by Rwanda, assembled to fight the Ngumino. These groups committed many abuses against Banyamulenge villages, setting them on fire and looting their cattle, thereby forcing them to live in a few enclaves, such as Minembwe. On their side, the Twigwaneho “self-defense” militias have become the Banyamulenge community’s principal armed movement, which has also been responsible for committing just as many abuses against civilians belonging to other communities, leading to population displacement. Last August, the United Nations Joint Human Rights Office estimated that the total number of displaced (across all communities) in the area amounted to 110,000 (in French).

Since January 2020, Interpeace, an international peacebuilding NGO, has tried to solve this problem through a community-oriented process. The meeting which took place March 29 to 31 is, in effect, the culmination of a process which started at the beginning of last year, including a ceasefire in March 2020 (with little lasting effect on the ground) and a series of “intercommunity” dialogue events.

According to the conclusions of the Kinshasa meeting, representatives of different communities noted that there were both points of convergence and persisting differences, and made recommendations and commitments, such as “to disengage from foreign armed groups,” “lay down arms […] at the end of a ceasefire process” and “raise awareness among their respective populations of the need to avoid the possession of weapons and to work for peace and security.”

Read the conclusions of the dialogue (PDF, in French)

These commitments are quite broad and vague, and therefore fail to clearly designate the actors, means, or timetable for their implementation. However, participants hope that the government will use them to form the basis of its “roadmap” for restoring peace. For this to stand a chance of success, the roadmap should move well beyond recommendations, by including in particular the reform of local administration and the security services, and a functional process of disarmament, demobilization, and reintegration (DDR).

The outcomes of the Kinshasa agreement were not, in any case, immediately apparent. Representatives of the Bavira community even directly rejected the conclusions of the process, believing that they had been marginalized. Moreover, several security incidents have occurred in the highlands since, such as at Rubarati on March 31 (where clashes took place between the Twigwaneho and some Mai-Mai groups), on April 1 at Kitanda (where a Munyamulenge woman was killed) or on April 4 (where a subsequent clash between the Twigwaneho and the Biloze Bishambuke occurred).

Weakness of Interventions to Bring Peace

Dialogue alone will not, therefore, restore peace. And this was not the aim of the organizers. But is it a step in the right direction? Past examples are far from encouraging. Between 2006 and 2020, at least 15 local agreements were signed in eastern Congo, according to a study by Claude Iguma Wakenge and Koen Vlassenroot published in July 2020. These agreements were implemented by such diverse actors as NGOs (Life & Peace Institute, in particular), the United Nations Organization Stabilization Mission in DR Congo (MONUSCO), or even Swedish or Swiss sustainable development agencies. “The general failure to make local agreements tangible reveals the weaknesses of peace interventions in eastern DRC,” the writers noted.

In a forthcoming report analyzing the conflict in the highlands (entitled “Mayhem in the mountains”), Judith Verweijen, Juvénal Twaibu, Moïse Ribakare, Paul Bulambo, and Freddy Mwambi Kasongo are even more critical of this type of process. According to them, “intercommunity dialogue can unwittingly result in worsening rather than mitigating the dynamics of the conflict and violence.” The risks raised include hiding internal conflicts, reinforcing the placing of blame for violence on communities (rather than on the armed groups themselves) and thereby increasing stigmatization. This logic was in plain sight at the Béatrice Hotel if some findings are to be believed, such as the accusation that the “Barundi were facilitating clandestine migrations and the infiltration of foreigners.”

“The argument put forward in this report is no doubt interesting, but in such a crisis situation, people identify very strongly with their community,” remarked a UN source who wished to remain anonymous. “This reality cannot be denied and the intercommunity model can be useful.”

Interpeace in any case tried to take past failings into account. Aware of the divisions within communities, the NGO organized a series of “intercommunity” dialogue events for each of the communities in 2020 in order to level out the disagreements and identify representatives through consensus. However, this had some adverse effects: the conclusion of the Bembe intercommunity meeting in March 2020, for example, described the Banyamulenge as “Rwandan so-called Banyamulenge,” which was inconsistent with easing tensions.

On the other hand, the process did reproduce some issues identified in previous studies, including the lack of coordination between the various initiatives. While Interpeace was leading its process in the highlands with British funding from January 2020, another parallel and concurrent initiative was underway to obtain a ceasefire between the armed groups of South Kivu: the Murhesa process, led by the NGOs Search for Common Ground (SFC) and the Initiative for a Cohesive Leadership (ILC), with funding from the Netherlands, Switzerland, and Sweden, which led to the signing of another ceasefire (also largely ignored) in September 2020. The creation of a peacebuilding coordinator position within the forum of international NGOs to try to solve the problem is reported to be ongoing.

However, there were other issues, such as the lack of participation by the authorities. Most of the “recommendations” by the dialogue’s participants were addressed to the national government, such as the management of the issue of the rural commune of Minembwe, implementing a DDR process, or establishing a roadmap. All the participants with whom we were able to speak insisted on the fact that the dialogue would only have positive effects if the government effectively engaged with all stakeholders. Instead, the national ministers present at the dialogue (the Minister of the Interior, Gilbert Kankonde and Defense, Aimé Ngoy Mukena) belong to the outgoing government and could be replaced by the next government.

Will the next ministers of the interior and defense transform these recommendations into an action program? It remains unclear, and it would certainly have been preferable for the dialogue to have been held under the auspices of the new government. However, the funding awarded by the FCDO for this project stops on March 31, which led to the timing of the meeting being brought forward. Discussions took place with a view to postponing the end of the funding (and therefore the meeting) to May, but were unsuccessful. “The presidency was involved and it was the head of the Civil House of the Head of State, Bruno Miteyo, who moderated the dialogue,” explained a source within Interpeace. “Future ministers will be briefed and will continue the process.”

The other category of actors capable of bearing on the conflict is the armed groups themselves. However, in the case of the Kinshasa discussions, there were very few among those invited, they only made vague commitments and above all, without any certainty as to their implementation on the armed group who they were supposed to represent. The group of Michel Rukunda, aka Makanika, who has become one of the main armed actors of the highlands, whose numbers were recently boosted by the arrival of former FARDC officers, was not represented, for example. According to a source close to the organizers, bringing more representatives of armed groups to Kinshasa would have created legal and security issues, but the other participants had insisted on holding the meeting in the capital so as to engage the national elite.

So, despite everything, could the process started by Interpeace lead to a breakthrough? One of the conditions would be that MONUSCO, the armed groups, and the next Congolese government converge to take up its findings and develop them into a complete roadmap, including the far-reaching reforms needed to solve the current situation. This dialogue was surely not the last.