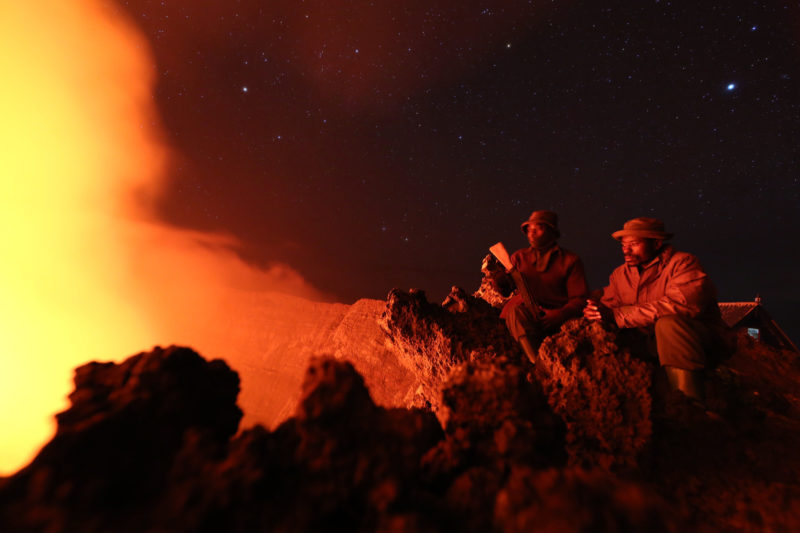 In the heart of the forest, Mikeno Lodge, and its spacious bungalows, is the most luxurious accommodation in the Virunga National Park, located in the east of the Democratic Republic of Congo. Fireside drinks of Champagne are served in the evening. During the day, visitors can meet orphan chimpanzees, brought up by the park rangers, and visit mountain gorillas in their natural environment. Virunga Park is one of the few in the world to host this critically endangered emblematic species.

On the morning of April 24, however, the lodge was empty due to the new coronavirus pandemic and tourism had been at a standstill for several weeks. But another scourge was about to strike.

Towards 11 o’clock, combat weapon shots suddenly tore through the forest calm. A few hundred meters from the bungalows, three vehicles, including two belonging to the rangers, had fallen into an ambush in Mahura. Half an hour of crossfire later, the death toll was horrific: 12 rangers, their driver and four civilians were dead. The Congolese Institute for the Conservation of Nature (ICCN) had never suffered such a heavy attack in Virunga Park.

Its rangers, however, were used to such danger. From Mount Rwenzori, which is often used to shelter the Allied Democratic Forces (ADF, a Uganda-based Islamist rebellion), to the Nyiragongo Volcano, overlooking the city of Goma, the 7,800 km2 Virunga National Park is regularly used by armed groups as their battlefield, smuggling route, or source of raw materials for looting.

This dangerous environment justified an arms race in the 2010s which led to the creation of the ICCN Quick Reaction Force (QRF), a paramilitary unit, sometimes deployed offensively, comprising 270 elite rangers (in French).  In this way, and as noble as their nature conservation mission may be, the rangers have in effect become actors caught up in the conflicts in the Kivus. The Kivu Security Tracker (KST) has recorded 28 clashes involving ICCN rangers since it started logging such incidents in 2017. This figure most likely only represents part of the true total.

The rangers often cooperate with the Congolese army in attacks which can cause collateral civilian damage, such as against the Mai-Mai Mazembe on May 23, 2019. “The park believes, rightly, that rangers are not legitimate targets under international humanitarian law, but the specific status of the QRF and the nature of their operations places them in a gray zone,” says Christoph Vogel, a researcher at the University of Ghent (Belgium) and former member of the UN Group of Experts on the DRC.

Furthermore, a long and complex conflict on the limits of the park’s boundaries has pitted them against some local communities. The park covers a quarter of the territories of Beni, Lubero, Masisi, Nyiragongo, and Rutshuru and deprives some farmers of access to land on which they are used to farming. This conflict is particularly acute in the region of Nyamilima, although the ICCN has recently authorized harvesting on a temporary basis from April 27 to July 26 to allow them to better cope with food scarcity caused by the pandemic (in French).

ICCN rangers therefore do not lack for enemies, especially its most feared unit, the QRF, which was decimated in the attack. On the same day, park authorities were able to publish several highly detailed statements on the circumstances surrounding the attack.

The first states that in fact it was a civilian vehicle which was targeted by the ambush. According to our information, this was a white Toyota Prado TX which was attacked with RPG rocket launchers and PKM machine guns. According to the statement, the assailants were reported to be none other than Rwandan Hutu rebels of the Democratic Forces for the Liberation of Rwanda (FDLR-Foca).  More specifically, the assailants appeared to be approximately sixty combatants from the Maccabé group, formerly known as the Commando de recherche et d’action en profondeur (CRAP), an FDLR commando unit.

ICCN rangers, who happened to be passing by on the drive back to their headquarters in Rumangabo, were reported to be only the collateral damage of the ambush and only targeted because they tried to assist some civilians. The second version slightly amended the first statement, which only stated that a civilian vehicle in close proximity had been attacked before the arrival of the rangers.

So why would the FDLR possibly have carried out an attack on a civilian vehicle with combat weapons? Several diplomatic, university, and ICCN sources outlined the scenario to KST. According to them, the FDLR is reported to have received information that FARDC Colonel Claude Rusimbi, deputy commander of intelligence operations of the 3409th Regiment, was going to use that road, between Goma and Rutshuru, on the same morning. It may well be that the FDLR mistook the rangers for his escort.

The FDLR had cause to hold a personal grudge against Rusimbi. On April 13, one of their main strongholds in Kazahoro, a few kilometers from the attack, had been attacked in a major offensive by the Congolese army (in French). According to several military and diplomatic sources, Rwandan army (RDF) Special Forces had secretly participated in this attack. However, according to several military and university sources, Colonel Rusimbi is just one of the Congolese officers in charge of coordination with their Rwandan counterparts. The colonel was also aware that he was the target of the FDLR, according to a member of his entourage.

Whether it was targeted retaliation against Rusimbi or not, the responsibility of the FDLR seems highly probable. It fits with both the weapons used and the modus operandi of the armed group, as well as the area known for attacks by this group.

The attack against the Virunga Park Rangers (red star) is located in an area where the FDLR-Foca regularly carry out attacks (other colors: incidents in which they were implicated, since June 2017)

In addition to the ICCN, who holds the FDLR responsible for the ambush, President Paul Kagame also accused the armed group during a press conference on April 27 (37th minute).

The FDLR also had its own motivations for attacking the ICCN. These rebels regularly suspect the park rangers of collaborating with the Rwandan army to hunt them down. In addition, according to several reports by the UN Group of Experts on the DRC, one of their main sources of funding is the sale and taxation of “makala,” or charcoal, produced by illegally burning trees from within the park. This effectively places them in conflict with the ICCN, including the QRF.

The FDLR have, however, put forward their own theory: according to them, the Rwandan army is responsible for the attack (in French). But this scenario appears convoluted: the ICCN is alleged to have knowingly lied, by wrongly accusing the FDLR so as to demonize them and justify, after the fact, the presence of the RDF on Congolese soil. Such a plot, involving several different actors, appears difficult to put together.

“The FDLR statement is totally disconnected from the reality of the facts,” claims an expert on this group. “It was only released to respond to the Rwandan authorities in the war they are waging in the media.”

“Members of the FDLR admit in private that they are behind this attack,” indicates Christoph Vogel. “According to them, this was a ‘mistake’ and they claim that their target was Rusimbi.”