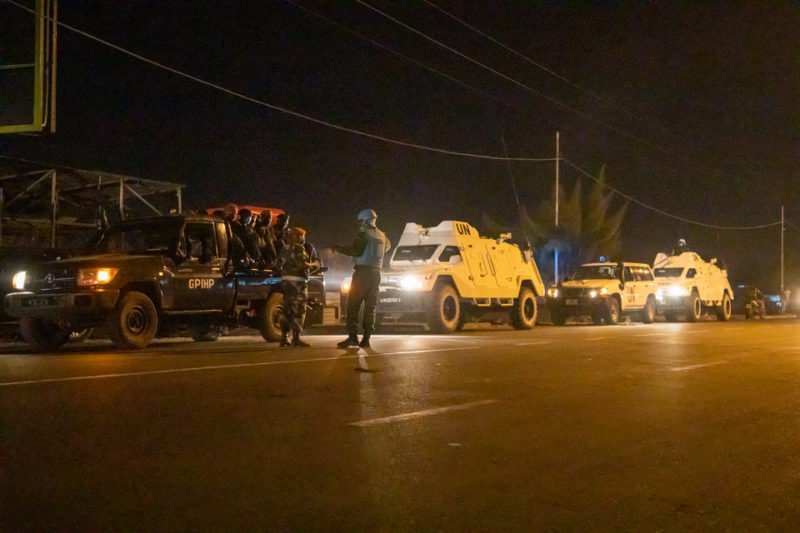 The decision was not taken lightly. In the month of May 2020, the new coronavirus had been spreading through the DRC for several weeks, and the town of Beni, like the rest of the country, had been placed under a public health emergency outlawing any gatherings of more than 20 people (in French). However, there was a something of greater concern in the eyes of militants of the citizens’ movement, the Struggle for Change (LUCHA). “Drastic steps have been taken to fight this epidemic, yet no cases have been recorded here,” recalls Steward, one of the collective’s members. “However, Beni residents are suffering much more from insecurity, which doesn’t seem to worry anybody,” he recalls.

For years, this town in North Kivu has lived under the menace of armed groups and particularly of the Allied Democratic Forces (ADF), a Ugandan Islamist uprising, which regularly commits abuses against civilians and plagues the region. However, in recent weeks, a new phenomenon has made the already dire situation worse: over the course of the first three weeks of May, at least six armed robberies were committed in the town.

For LUCHA, it had become unbearable. So on May 20, the citizens’ movement wrote to the Beni municipality to inform it of its intention to organize “peaceful demonstrations” to denounce “the upsurge in insecurity and the wave of killings in Beni town.” The protests organized for the following day were severely repressed. One of the protesters, Freddy Marcus Kambale, a 19-year-old schoolboy, was shot by police and 21 of his classmates were arrested. The trial of the police officer suspected of this killing is still ongoing (in French).

Beni is far from being an isolated case. For several weeks, the exasperation of locals living in the large urban centers of the Kivus has been growing in the face of a perceived increase in crime. The police, sometimes suspected of complicity with the criminals, are finding it difficult to contain social unrest. In Butembo, on May 27, taxi drivers also took to the streets. The day before, one of them had been killed by armed men. Once again the protests degenerated: one of the protesters was shot and wounded by the police.

The rise in urban insecurity does not appear to be limited to the Kivus. In Lubumbashi, on May 19, Mgr Jean-Pierre Tafunga warned of the upswing in “indescribable” insecurity (in French). And the same day, National Assembly members of the Defense and Security Commission challenged the Vice-Prime Minister and Minister of the Interior, Gilbert Kankonde, on the increase in insecurity in the country’s cities (in French). “We have received calls from nearly everywhere in our electoral districts alerting us to this phenomenon,” explained its rapporteur, National Assembly member for Walikale, Juvénal Munubo, to KST. The phenomenon has different names in different towns: “40 voleurs” in Goma, “Kasuku” in Butembo, “Kuluna” in Kinshasa… However, the general trend of a rise in urban violence is clear to see.”

It remains difficult to come up with a precise number for this increase due to an absence of statistics on insecurity in the DRC. The lengthy reply penned by the Vice-Primeand Minister of the Interior to National Assembly members provides no statistics, even though it acknowledges the issue.

Data collected by KST nevertheless appears to confirm this trend: an increase in the number of armed robberies was recorded from April in the towns of the Kivus (Beni, Butembo, Goma, Bukavu, Uvira, and Baraka). Twenty incidents of this kind were recorded in April and 24 in May, compared with a monthly average of 11.7. This is unprecedented since March 2018.

The town of Butembo was particularly impacted with 11 such incidents in May (compared with 1.7 in average). This is unprecedented since KST began logging such data in June 2017.

Why is there such a rise? According to Juvénal Munubo, the public health crisis COVID-19, the steps taken to contain it, and the economic crisis are all possible obvious candidates.

Elsewhere in the world, however, isolation measures have inversely caused crime to drop. But it is possible that the consequences of the pandemic are different in the DRC. Except for rare exceptions, such as the Gombe neighborhood in Kinshasa, and the Ibanda neighborhood in Bukavu, residents of Congolese towns have not been ordered to observe strict self-confinement. Most criminals have therefore been free to roam towns, like the rest of the population.

The economic crisis on the other hand has not left DRC cities unscathed and could partly explain this upswing in robberies. On international markets, the Congolese franc has lost approximately 11% of its value since March, dropping from 1700 francs for one dollar to nearly 1900 today, eating into the purchasing power of the Congolese paid in national currency.

In Kinshasa, deadly clashes took place between the police and protesters calling for the reopening of the large market located in the town of Gombe, where food is available at affordable prices (in French). In total, the Central Bank of Congo has revised its 2020 economic forecasts downwards to -2.4% (against -1.9% previously) and now estimates inflation at 9% against the planned 7% (in French). According to the Central Bank, the crisis is essentially due to the “both internal and external population isolation measures.”

Since March, towns in the Kivus have been particularly impacted by border closures with three neighboring countries (Uganda, Rwanda, and Burundi) with which traditionally there is intensive trade.

Traffic between the towns of North Kivu (Goma, Butembo, and Beni) was also suspended for three weeks in April, as it was between Goma and Bukavu.

The fact that the town of Butembo, usually a thriving trade hub, has been the most impacted by an upsurge in armed robbery may also point to a link between the slowdown in trade and the increase in urban insecurity.