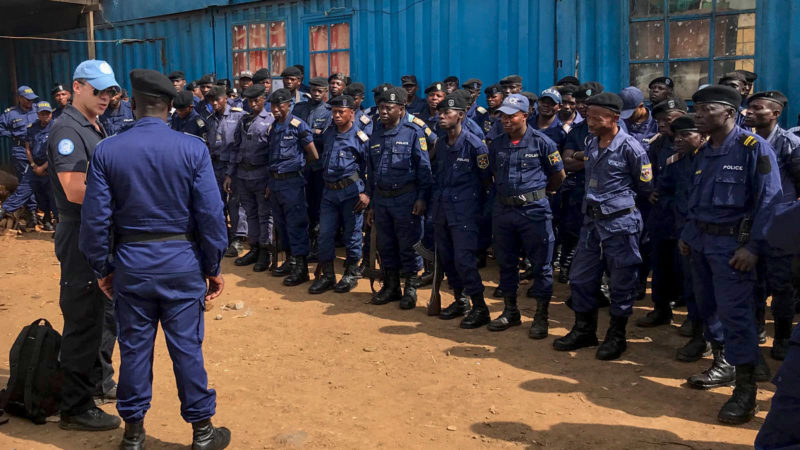 Since the beginning of the year, crime has risen in several cities in the Democratic Republic of Congo––a wave of kidnappings, grenade attacks, robberies, and murders. What is behind this?

Robert Ndjangala, the coordinator of SAJECEK, says these statistics points to “a surge in crime in Bukavu.” Last month, in the capital of South Kivu alone his association recorded six burglaries, four kidnappings and one murder, on top of many other killings in Bukavu in recent months. In addition, citizens have lamented a trend of dead bodies appearing on streets and alleyways in the morning.

Via WhatsApp, Maschack Bilubi, Bukavu’s mayor, gave his explanation to the Congo Research Group (CRG). “These bodies often smell of alcohol. That makes us believe that the deaths are linked to heavy consumption of alcohol by street youth.” But the does not deny “the proliferation of targeted killings” and “the rise of banditry” which can be explained, according to him, by “the illegal circulation of small arms.” SAJECEK suggests that it is possible to purchase a small weapon in the city for $20 or $25.

Bukavu is part of the Congo that has been under the sway of national and foreign armed groups (Burundians, Rwandans and Ugandans) for more than two decades. “Some armed groups are reported in the outskirts of the city and their fighters do not hesitate to enter Bukavu to restock and look for money,” says Robert Ndjangala, who refers to “cases of grenade attacks and robbery of currency dealers in the middle of the day by masked armed men.” According to information collected by his NGO, other militiamen also rent out their services and “are recruited to perform dirty work, among other things, the settling of scores.”

In recent years, there have been several demobilization campaigns targeting these fighters. They have, however, never produced the desired results: the security of people and property and the pacification of this part of the country remain a distant objective. Since the inauguration of President Felix Tshisekedi, several armed groups have decided to surrender, but there is still no operational demobilization program. As a result, crime is being exported to major Congolese towns. “This is also the result of all the ex-combatants’ reintegration processes that have failed. As a result, abandoned to their fate, young people who have learned nothing other than the handling of weapons find themselves unemployed and do not hesitate today to resort to these criminal activities in the city,” explains Bilubi. Armed robberies, robberies, targeted attacks, murders, kidnappings are now part of the daily life in Bukavu.

This uptick in crime is noticeable in several other cities in the Kivus, including Goma (a parliamentary mission visited at the end of March to investigate crime here), Butembo and Beni. Since the beginning of the year, the Kivu Security Tracker (KST) has documented 42 people killed and 27 abducted in the cities of Bukavu, Butembo and Goma. Lubumbashi in the south of the country and Kananga in the center have also been affected. In Kisangani, the capital of Tshopo province, “the deterioration of the security situation in the city is mainly due to population movements,” according to Dismas Kitenge, president of Groupe Lotus, a local human rights NGO. “Young people, mostly from South Kivu, are working as motorcyle drivers in the city and are often cited as the perpetrators of robberies at night, even armed robberies and rapes,” he said.

More generally, Kitenge thinks the political and electoral context may play a role in this trend. In Kisangani as elsewhere, “young people were instrumentalized by politicians during the election campaign: candidates often used the big arms to secure their meetings, but also to disrupt the activities of political opponents. This has often exacerbated political tensions and led to attacks between rival groups,” he says.

Several other human rights defenders and civil society actors contacted also noted that local authorities are not perceived as legitimate. This questioning of local power could also, according to them, explain the rise of violence in cities. Add to this social discontent and grumblings within the army and police, who live are underpaid and live in poor conditions, thus becoming themselves sources of insecurity for civilians. “When they are deployed at night for patrols, many tell us that they take the opportunity to harass the population so they can support their wives and children the next day,” said Ndjangala who also deplores the lack of political will from the government.

In other countries, similar factors – thousands of ex-combatants, a weak state, and an abundance of weapons and ammunition – have created extraordinary waves of urban crime. In El Salvador, Honduras, and Guatemala, decades of civil war have given way to the worst urban insecurity in the world. At the end of these wars, a large pool of demobilized and unemployed men with easy access to weapons have fueled organized criminal groups, particularly in El Salvador, which has the highest homicide rate in the world. In Guatemala, mafia groups have formed state intelligence and military forces.

In the Kivus, local city halls have started tackling the problem with their own means, as they wait for a more comprehensive approach from the national government. In Bukavu, for example, an urban security council is held every Wednesday of the week to assess the situation and adjust their security approach. “Nocturnal patrols are organized, random checkpoints are set up to search for thugs, a campaign to get rid of the kiosks and abandoned vehicles––possible hiding places for bandits––was launched and sensitization of local officials in neighborhoods are underway to identify newcomers,” saus Bukavu’s mayor.

However, these measures are not new. In early 2018, the government of South Kivu launched operations “Tujikinge” against insecurity in urban areas, but without being able to end the criminal gangs operating there.